EuroBLECH 2012 – The latest from Bystronic

Bystronic travelled to the EuroBLECH 2012 with numerous  innovations. The highlights were from the laser cutting, bending  and software segments.

Visitors to the Bystronic exhibition booth at EuroBLECH 2012 were not  disappointed with their expectations: The company was once again  present at this year’s edition of the leading sheet metal processing trade  fair with an abundance of innovations. “We have improved the  performance of our offerings in all product segments”, declares Johan  Elster, Head of Business Unit Markets.

No less than three of the innovations at this year’s trade fair came from  the laser cutting segment. Innovation number one: The BySprint Pro  3015 with six kilowatts. BySprint Pro? That exists already, surely? Quite  correct, but only with the ByLaser 4400 laser source, which means with  4.4 kilowatts. And since the system now offers even more laser power, it  is even more versatile. It is now not only a high speed system for thin to  medium-thick metal sheets, but also an all rounder with which the user  can cut sheets up to 25 millimeter thick.

A similar development has taken place with the second innovation: The  fiber laser cutting system BySprint Fiber, which is now available in the  4020 format. A technical gimmick one might be tempted to say, but: A  four times two meter sheet allows 78 percent more parts to be nested  than a sheet with a format of three by one and a half meters. The time  during which the machine can cut without interruption increases in the  same ratio. Put another way: Unproductive times are once again reduced,  while the parts output moves in a diametrically opposed direction. And  something else is new with the BySprint Fiber: It is now available with  both three as well as four kilowatts power and hence approaches the  sheet metal thickness range that until now was limited to CO2 laser  cutting systems, and provides the user with even greater flexibility.

Innovation number three: The highlight. The ByAutonom. Its name says it  all: The ByAutonom was developed from the beginning as an  autonomously working machine, which together with automation modules  such as ByTrans, ByTower and Bycell can be used for reduced-manning  operation. This is also applicable if the type and thickness of the raw  material has to be changed. Because: The machine simply sets the  applicable focal length and selects the appropriate nozzle, centers  automatically and continues cutting. And if a part tips? No problem. The  ByAutonom detects a crash, stops immediately, checks if the nozzle is still  fitted, travels to the centering position and automatically re-centers the  nozzle. It notes where the crash occurred, bypasses this part and moves  on to cut the next one.

Furthermore: The ByAutonom simply cuts more parts and it works  reliably. “Higher output means that the cost per part is reduced”, explains  Johan Elster. Latest generation linear motors accelerate the machine with  breathtaking speed and bestow the ByAutonom with a dynamism  unequalled by any other Bystronic system. This is supported by the  extremely rigid machine bed and the light-weight bridge. Even thick  material is cut faster and better because a special 9 inch cutting head,  which is better suited to such orders than a 7.5 inch cutting head, is part  of the standard equipment. And the reliability is ensured amongst other  things by the Condition Messenger and the Maintenance Messenger. The  Condition Messenger graphically shows the operator the status of  individual components and informs him when a component should be  checked. These components include the laser source, the nozzle changer,  the focal length changer and the beam path. The Maintenance Messenger  on the other hand indicates to the operator when the machine and the  laser source are due for maintenance. “The two messengers are  extremely helpful”, says Johan Elster with conviction. Why? “Because the  customer can put even greater trust in his machine. He enjoys complete  planning reliability”, adds Johan Elster. 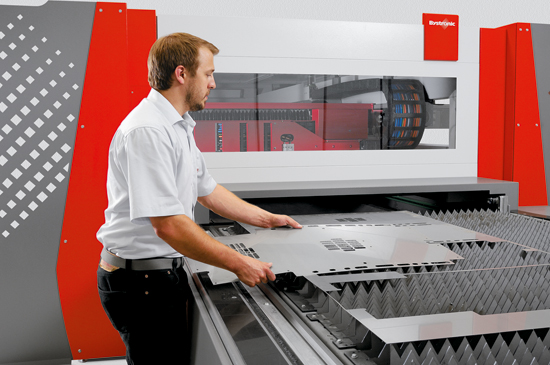 At the EuroBLECH 2012 the ByAutonom won the MM Award. It was  awarded the main prize in the category Cutting. The prestigious MM  Award is presented by the German trade journals “Maschinenmarkt” and  “blechnet”. And what’s more: The ByAutonom looks simply fantastic.

Plastic material instead of sheet metal, to permit new and ergonomic  shapes to be implemented, additionally a new color. And why all of this?  “Emotions play a significant role in the decision to purchase, something  that is often underestimated”, as Johan Elster knows from countless sales  discussions. “And the ByAutonom awakens positive emotions”, says Johan  Elster, “just like the Xcite”, he adds, “for which the new design concept  was also used.” Xcite?

The Xcite was the next exhibition highlight from Bystronic. A new  pressbrake. Electrically driven; never seen before at Bystronic. And what  are the benefits for the customer? “It is the fast and economical way to  high-quality bent parts”, explains Johan Elster. “Above all fast”, he adds.  In concrete terms some 2.5 times faster than a hydraulic pressbrake.  Using the Fast Bend+ safety system the tool can be positioned very close  to the metal sheet without the operator being placed in any danger. Only  then does the machine switch over to bending speed. 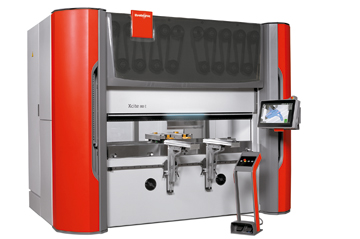 And it is accurate, the Xcite. Thanks to Bystronic’s proprietary Force  Dynamic Drive it bends to within a top class tolerance of plus/minus 25  arc minutes and with a simply incredible repeatability of plus/minus  0.0025 millimeters. Behind the Force Dynamic Drive there lies the  interaction between a special mounting of the lower beam and the unique  drive system of the upper beam. Delightful for the machine operator: The  Xcite is user friendly. Thus the use of the ByVision control package for  laser cutting and waterjet cutting machines has been extended for use  with pressbrakes. Since this took place, every user can attain the required  objective with very few interactions via the 22 inch touch screen.  Whereby the level of prior knowledge required is negligible, since:  ByVision guides a beginner safely through the programming and supports  him with many automatisms. On the other hand it allows professionals to  make use of their knowledge and to define their own limits for the  bending technology.

Last but by no means least: BySoft 7. “Not simply an update, but rather a  completely new software generation”, as Johan Elster explains. BySoft 7  was unbelievably well accepted by the visitors and converted the  Bystronic Software Forum into a kind of vacuum chamber that seemed to  suck in the public as if by magic. But what is so special about BySoft 7?  “Numerous new functions and possibilities”, according to Johan Elster.  Already if a user wishes to construct a part or a component, he  experiences the first surprise: A single click and the latest version of  SolidWorks is opened and hence a 3D and 2D CAD package with a  worldwide fan community as well as an excellent reputation.

Also at the CAM level, BySoft 7 users will find numerous innovations.  Inside contours of cut parts, for example, can be automatically reduced so  that can no longer flick up. This function minimizes the probability that  the nozzle collides with such scrap pieces. The result: The machine  functions even more reliably. Greater process reliability is also offered by  what is known as spread nesting, with which the nested parts can be  better distributed. Better in this case means that BySoft 7 increases the  distance between the parts in order to achieve an even higher process  reliability. If the user wishes to go in the opposite direction he can now  make use of the new function, compressed nesting. With compressed  nesting, BySoft 7 minimizes the safety distance in order to nest even  more parts on metal sheet. Additionally there is the optimized common  cut, pre-piercing of selected contours, automatic scanning and much  more.

By the way, the slogan under which BySoft 7 is marketed is Make it easy.  After all, the working day in a sheet metal processing company is already  complicated enough. Make it easy may without hesitation be interpreted
in two ways: Firstly BySoft 7 is plausibly structured and hence for firsttime users very easy to operate and secondly BySoft 7 simplifies the  processes within the factory. Nest parts, create cutting plans, generate  bending programs, simulate bending sequences, and, and, and.

Everything takes place automatically and on the basis of reliable data.  BySoft 7 consists of four modules: Sheet Processing, Tube Processing,  Bending and Plant Manager. The Plant Manager is a unique tool that plans  and also monitors all laser and waterjet cutting processes for the  customer. Over and above this it makes available all relevant machine  and production data and thus ensures maximum transparency in sheet  and tube processing .

Naturally, in addition to the innovations, a great many tried and tested  solutions from all product segments were also on display in Hannover.  Amongst these was also the waterjet cutting system ByJet Smart, which  was launched on the market already in 2011, but could be seen at  EuroBLECH this year for the first time. Not only the numerous solutions  for sheet metal processing were new, but also the Bystronic exhibition  booth which was described by Johan Elster as “exciting and a total  success”. And for anyone who did not have the opportunity to visit  EuroBLECH 2012? “We cordially invite these people to experience our  innovations in one of our local demo centers or at the Bystronic  Headquarters in Niederönz.” 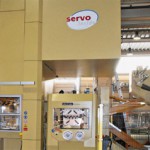 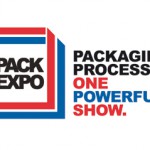