This past fall, Krones AG shook up the bottling market with a newly  developed PET stretch blow molding machine. The third generation  of the Contiform series features astounding production output, increased precision and freedom in the stretch-forming process, all while  still reducing power consumption significantly. The bottling specialist achieved this development leap by switching from pneumatic and  belt drives to an electric direct drive solution and an integrated drive  solution based on B&R technology. In anticipation of the projected demand, Krones will be implementing assembly line production for the  new Contiform machines – an absolute first in the company’s history.

With up to 36 blow molding stations, the brand new  Contiform 336 rotary stretch blow molding machine can  achieve an output of 81,000 PET containers per hour. The  bottle preforms are heated to a temperature of 100 to  120°C in an infrared linear oven and then guided by a starwheel into the aluminum blow mold. As soon as the mold  closes, a stretch rod is inserted in the neck of the preform  to stretch it axially while applying up to 40 bar of blowing  pressure. This presses the sides of the preform against the  interior wall of the mold to shape the bottle, which is then  collected by an output starwheel.

This method is used to produce around 300 billion bottles  per year, and with this number growing rapidly, bottling  plants are demanding more and more performance from  their machines. Still, with environmental awareness and  energy prices both increasing steadily, all this performance  must not come at the expense of sustainability.

Each station handles 2,250 bottles/hour
With this latest revamp of the Contiform series, first introduced in 1997, the main challenge was balancing the  top priorities of maximum output and minimum power  consumption. Krones mastered this challenge in expert  fashion. They were able to further raise the bar set by the  previous generation, boosting the output of each blowmolding station from an already impressive 2,000 bottles  to a record volume of 2,250 bottles per hour.

To achieve this jump, the engineering team led by Dieter Finger, head of electrical development at the Krones Plastics

Technology division, had to do some pretty heavy innovating. «Until now, belt drives have been sufficient for driving  the various wheels,» he states. «With the new Contiform,  however, we’re dealing with speeds where the belt stretch  inherent in this solution keeps us from achieving the precision needed for a smooth transition between the blowing  wheel and the transfer wheel.»

The engineers solved this by replacing the belt drives with  direct drives. The third generation of Contiform machines  now uses torque motors that provide up to 2,300 Nm of  torque. «These are not only much more precise than belt  drives,» explains Finger, «their sophisticated power management system allows them to share power in the event  of an outage or emergency stop, which means they can  quickly bring the machine to a stop without losing synchronization.»

These motors are controlled using Krones’ SDC (Servo  Drive Control) solution based on B&R technology, which  the company has used across multiple divisions for over  five years. The SDC solution allows an unlimited number  of axes to be coupled via POWERLINK in a wide range of  topologies. The inverters come from B&R’S ACOPOSmulti  series, with an X20 CPU acting as the controller.

The great leap in performance seen in the new Contiform  generation isn’t explained by the torque motors alone.  Only by combining this innovation with the move from  pneumatic to electromagnetic control of the stretch system were the Krones engineers in a position to achieve  their formidable output. In place of pneumatic drives,  tubular linear motors now control the movement of the  stretch rods in the blow stations.

«Unlike conventional flat or U-channel linear motors, this  design has a permanent magnet slider rod that moves inside a stator tube, which holds the drive coils and a Hall  sensor,» explains Krones’ electronics expert. «The tubular linear motor eliminates the belts and play associated  with standard stretch rod drive solutions. Since the force  is translated directly into extending the stretch rod we can  also get by with much smaller bearings, resulting in a motor that is now greaseless and maintenance-free.»

This custom motor was developed by NTI (LinMot) according to Krones’ specifications. «The specifications included that the motor provide a maximum force of 2 kN  and achieve a top speed of 2 m/s, adds Finger. «We also  needed positioning precision of 0.2 mm while also being  able to integrate the motor seamlessly into the rest of our  drive solution.»

In order to satisfy these specifications, the motor was designed for operation on a standard three-phase ACOPOS  drive from B&R with a DC bus voltage of 800 V. The B&R  ACOPOS drive also evaluates and linearizes the signal from  the Hall sensor. «The programming involved here is not  to be underestimated,» Finger explains. «Yet B&R again  showed their flexibility and commitment by modifying the standard ACOPOS firmware. As a result, we now have  company-standard tubular linear motors that  combine very homogeneous movements with minimal power consumption.»

For the inverters controlling the linear motors, Krones selected B&R’s ACOPOSmulti65 with IP65 protection together with a B&R X20 CPU to provide control for the blowing  module. To provide valve control and monitor the blowing  pressure, IP67 I/O modules are connected to the controller’s second POWERLINK interface. Finger is well aware of  the clear advantages this brings for machine manufacturers. «Installing this inverter directly on each stretching station enables us to produce the entire station in advance,  test it and parameterize it. We also only need one supply  line for each station. This not only fits right in with our  modular approach, it also fully supports the assembly line  production strategy we’re using for the first time on these  machines.»

Machine operators also profit from the switch to electric  stretching, which not only boosts output, but also gives the  operator considerably more freedom to adapt the stretching process. Finger illustrates what this means in practice:  «First of all, the bottle type can be selected with the push  of a button, eliminating the time-consuming task of manually switching out heads. The push of a button is also all it  takes to modify the movement profile of the stretch drive.  As a result, when switching from a small volume bottle to  a large volume bottle, it is no longer necessary to switch  out the curve.»

But they didn’t leave it at that. The curve can even be freely  configured to divide the stretching process into phases
with different speeds. The operator can use the additional  control freedom to produce the same bottle quality from  cheaper preform material or to achieve more complex  bottle designs that used to be impossible to create with  the necessary quality.

What’s at least equally important for the operator is that  the new generation consumes significantly less power. This  was achieved in part by eliminating the pneumatic drives in  the stretching stations. Another contribution comes from  the ability of B&R’s solution to extend the DC bus supply  up to 70 meters. Krones took advantage of this feature  to couple the DC bus supplies of the machine’s stretcher  modules and drive modules. In the event of a power failure,  power can be diverted from the blowing wheel to bring  the system to a controlled stop and move the stretch rods to a safe position. «If we didn’t have our entire drive  system from a single supplier, we would have to work with  a variety of DC bus voltages.This would require DC/DC  converters, which have given us problems in the past,»  recalls Finger.

Power is fed back into the DC bus even during normal  operation. The energy generated by braking the stretch  rods (the compressed air in the bottles shoots them back  to their starting position at up to 650 N) can be utilized by  other stations, allowing each station to use an average of only 250 watts.

Other measures implemented by Krones to further optimize power consumption include the newly developed  intermediate blow stage and a perfected internal compressed air recycling system, as well as further reductions  in dead space volume. All in all, the amount of compressed  air required by the machine was reduced by a third.

The advantages of Krones’ new series of blow molding  machines are clearly evident. It comes as no small surprise,  then, that the new generation of Contiform machines was  met with heavy demand even before its official release,  or that it was a smash hit at the 2011 Krones Customer  Day. 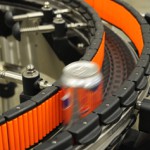 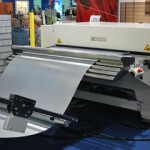