North American Robotics Industry Up 20% in 2012

North American based robotics companies are in the midst of another strong year, with new orders up 20%, according to new statistics released by Robotic Industries Association (RIA), the industry’s trade group.

The automotive OEM and component suppliers remain the robotics industry’s biggest customers, accounting for 64% of the new orders through the third quarter. Sales to these two segments rose 45% through September.

Other industries with increased robot orders include metalworking (up 13%) and life sciences/pharmaceutical/biomedical (up four percent).

“The strong automotive-related orders in 2012 are especially impressive given that sales to automotive tier suppliers and OEMS jumped by even greater amounts in 2011 (77% to automotive component suppliers, 59% to automotive OEMS),” said Jeff Burnstein, RIA’s President.

“The strong growth in 2012 continues to reinforce the significant value that robots provide as a productivity tool for major US manufacturing companies. While automotive remains the largest market, interest across a wide range of both manufacturing and non-manufacturing companies continues to build and will provide the foundation for long-term industry growth,” said John Dulchinos, President & CEO at Adept Technology, who Chairs the RIA Statistics Committee and serves on the RIA Board of Directors.

RIA estimates that some 225,000 robots are now at use in United States factories, placing the US second only to Japan in robot use. “Many observers believe that only about 10% of the US companies that could benefit from robots have installed any so far,” Burnstein said, “and among those that have the most to gain from robots are small and medium sized companies.”

To help reach small and medium sized companies, RIA is one of the sponsors of Automate 2013, North America’s broadest automation solutions show and conference. Slated for January 21-24 at Chicago’s McCormick Place, the event focuses on how robots, vision, motion control and related automation technologies can help solve challenges faced by companies of all sizes in every industry. The event is collocated with ProMat 2013, North America’s leading event for materials handling and logistics. 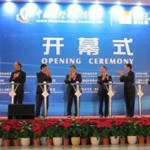