At dairy giant Arla Foods’ factory in the small Swedish town of Götene, the repetitive work of packing cheese into boxes on Line 21 was taking its toll on the workforce. Thomas Johansson knew he had to take steps to protect the health of his workers.

Plucking a block of plastic-wrapped cheese off a conveyor belt and putting it into the correct position in a box at the rate of nearly one per second caused such high rates of repetitive strain injuries that this particular part of the factory had been labeled a “red” workstation, a designation for areas with elevated health and safety risk. “This is high-speed, repetitive work, and it led to injuries which in some cases were permanent,” says Thomas Johansson, project manager at Arla Foods. Determined to take steps to protect the health of its workers, Arla Foods brought in engineering company Graniten to come up with an automated solution to take the strain off its employees.

Replacing workers with an automated solution would not be straightforward because of the limited space available. “We needed machines with a very small footprint that could nonetheless handle a high flow rate,” he says. The robots would also have to deal with packing the cheese into both cardboard boxes and returnable plastic crates that have different dimensions and have to be packed differently. “So our demands were for a pretty sophisticated solution,” says Johansson.

Graniten, based in Uddevalla, Sweden, has been supplying Arla Foods with specially designed machines since the mid-1990s, most of which have replaced manual product handling. “The basic idea was to create a better and safer working environment,” says Martin Krewer, project manager at Graniten. “Our solution was to design a system with two operation levels: one for the crates and boxes and one for the cheese.” Cheese comes in on the upper level and is distributed evenly to the four packing cells, each built around an IRB 120 robot from ABB. «Their reliability is excellent.” says Krewer

Prior to construction, Graniten used ABB’s Robot Studio simulation program to simulate the cell and optimize the placement of robots for the shortest possible cycle time. With a total footprint of just 7.5 m2, the four robots pack 90 units of cheese per minute – the same number of cheese that two workers did before. They are in operation from 6 AM to midnight, the equivalent of two shifts per day. One person is required to monitor the robots per shift, so about 16 man-hours are saved per day. And, most important, there are no more repetitive strain injuries on Line 21.

Johansson declares himself well-satisfied with Graniten’s solution and adds that the workers who are now monitoring the robots rather than packing cheese by hand welcome the fact that they are no longer exposed to potential injury. He says, “The robots can’t do everything that a person can do on this workstation, but they can certainly do 98–99 percent 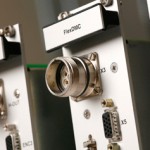 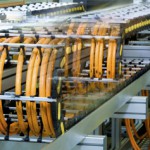