A FANUC M-1iA Delta Arm robot has recently been commissioned on a bottling line at the Guadalix, Spain, facility of pharmaceutical manufacturer Merck. Placing dispenser caps onto bottled allergy medications, the M-1ia is capable of operating at 120 cycles per second.

Integrated by FANUC systems partner Tecnomecánica, the M‑1iA needed no special clean room compliance as the caps are placed onto filled and sealed bottles – the final operation before packing.

A spiral conveyor on the robot cell lines up dispenser caps on a rail and a nylon worm drive positions bottles alongside. The robot grips a cap and places it on the bottle, which has previously been sealed by a screw-on cap. A simple encoder supplies the position data.

The M-1iA signals the worm drive to position the next bottle. A cylinder arrangement after the robot cell firmly presses the dispenser caps down onto the bottles. The capped bottles are then conveyed to the packaging machine.

Available as a four or six axes robot the M-1iA used at Merck only requires four axes. The cell is controlled by a 19”-rack-mounted FANUC R-30iA Mate Controller, the most-compact robot controller produced by FANUC.

Ten variants of bottle can be run on the system with robot line change requirements restricted to selecting the appropriate programme. 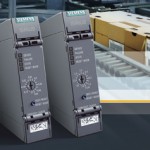