High up in the Black Forest in southwest Germany sits the 221-year-old Rothaus (red house) brewery. The beer brewed here has long since achieved a cult status among German beer drinkers and despite being over two centuries old, the brewery is equipped with the latest in modern technology, including four ABB robots that handle the beer kegs and cases.

On the production floor an ABB robot bends gracefully forward and grips a stainless steel beer keg gently but firmly around its “waist,” then smoothly rotates 90 degrees and carefully places it, inverted, in the packing area. For many years, keg handling was done by hand; then, later, by an elaborate gantry unit. Now two identical ABB robots ( IRB 6640) perform the task, like clockwork and with much less fuss. The special Foundry Plus 2 robot variant is ideally suited for conditions in the brewery.

One robot jockeys the empty, not-yet-cleaned, stainless steel kegs from a wooden palette onto a conveyor belt. A good 10 minutes later, its partner neatly stacks the now thoroughly cleaned and filled kegs. The robots are painted the fiery Rothaus RAL 3000 red, like all other moving equipment in the brewery. “They couldn’t be more reliable and low-maintenance,” reports Robert Jäger, who is in charge of the beer-filling operation, “and in comparison to the earlier gantry unit they take up a lot less room, too.”

Only 10 percent of the Rothaus beer ends up in kegs; the rest goes into the attractive bottles so loved by beer drinkers up and down the country. Of the bottled beer, one in every eight is sold in a six-pack – and here, again, an ABB robot has a hand in passing around the beer. Since 2005, an IRB 6640 robot has been “assisting” the automated packing machine in which a 24-bottle crate is repacked into four six-packs. The IRB 6640’s strong beer-lifting arm can effortlessly whisk its 142 kg load onto a conveyor belt.

The beer crates come tied together, for safety during transport, in a four crate wide, two crate deep configuration. Removing the safety band is the job of the fourth member of the ABB robot team: the small IRB 140. Project leader Ralf Krieger, is also pleased with the ABB products, saying “Like the two robots in the filling area, these two were also brought into service really quickly.” These are words that the ABB team members like to hear – maybe they will celebrate them by clinking together some of those attractive foil-topped bottles. 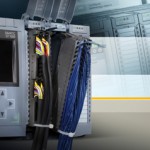 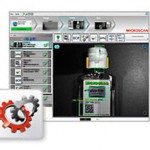 Microscan to Introduce AutoVISION 2.0, Next Generation of Simplified Machine Vision at Automate 2013