Shipments of precision geared products (gearboxes and geared motors with backlash ratings of less than 20 arcminutes) were nearly 80 percent higher in 2012 compared to 2009 levels. However, uncertainty about the Eurozone economy and China’s decelerating economic growth are the leading factors in the more than one percent decline expected in precision geared product shipments in 2013. IMS Research, now part of IHS Inc. (NYSE:IHS), projects the market for precision geared products to reach an estimated value of nearly $1.7 billion with over 1.8 million units shipped in 2013.

Precision gearbox shipments, which accounted for more than 95 percent of the precision geared products market in 2012, increased by more than 70 percent from 2009 levels due to pent-up demand for servo-driven machinery and increased access to capital. A significant amount of investments were made in the automotive industry, where demand for industrial robots used in the production of vehicles spurred a sharp increase in precision planetary gearbox shipments. Precision planetary gearboxes accounted for more than 82 percent of precision geared products shipped in 2011. Investment in new automobile manufacturing facilities is expected to continue, however at lower rates than those seen in 2010 and 2011. Sales of electric industrial robots to the automobile industry have slowed considerably in 2012 due to lower of demand for Japanese products from China and continuing weakness in the Eurozone economy.

Precision gearbox and geared motor shipments into industry sectors such as materials handling, woodworking and printing are also expected to grow at a slower pace in 2013 following the fulfillment of pent-up demand that resulted from the 2009 recession. Although precision geared product shipments to the food, beverage and tobacco industries are expected to decline in 2013, positive signs of economic growth in the Eurozone and China could mean further growth of precision geared product sales from 2014 to 2016.

“The future performance of the precision geared products market will depend greatly on what happens in 2013,” said Turnbough. “If current global economic conditions persist then it could mean further deceleration in precision geared product shipments for several years because of the psychological impact that this slow recovery is having on industrial equipment end-users and OEMs. A bleak outlook makes it harder for them to invest in high-precision technology despite cost savings that could occur over time.” IMS Research’s recently published study titled The World Market for Precision Gearboxes and Geared Motors indicates shipments will exceed two million units by 2016 despite the decelerating shipment growth. 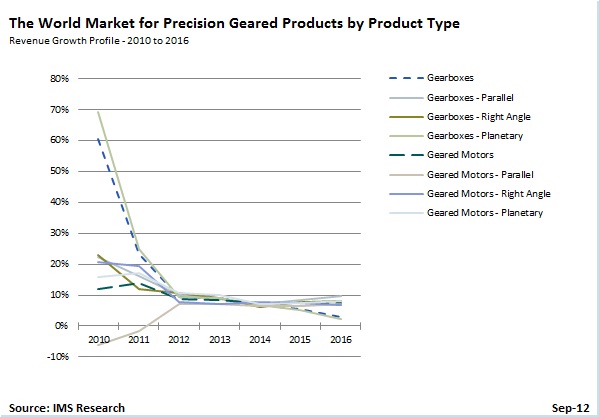 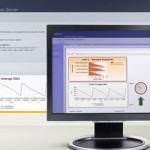