Introducing IS1+, R. STAHL presents a key innovation for the leading explosion-protected remote I/O system IS1. IS1+ now provides various additional features to address current and future requirements. In recent years, IS1 has maintained technology leadership in hazardous areas through many innovative new functions, including Fast Ethernet connection, PROFIBUS redundancy, DTM support, integration of optical rings and modules with integrated magnetic valves. While it surpasses these features already at its market introduction, IS1+ also places high priority on protecting previous investments in existing plants and machinery. The new I/O modules are fully downward compatible to their predecessors, allowing users to exchange or upgrade legacy devices without any changes to project planning and wiring.

New mixed modules enable efficient solutions even at a low signal density and reduce the number of module types by 50%, which minimises expenses for spare parts storage. The IS1+ module range includes an eight channel analog I/O module with HART, a 16 channel digital I/O module and an eight channel temperature module for resistance thermometers and thermocouples. The signals can be individually parameterised for each channel. Moreover, R. STAHL also supplies digital output modules with an increased output power suitable for most intrinsically safe magnetic valves. Designed for installations in zone 2 for connecting intrinsically safe field devices from zones 0 or 1, the IS1+ series also comprises cost-optimised zone 2 I/O modules with an identical functional range. In addition, a new Low Power technology has been developed especially for the new IS1+ I/O level, which makes the modules suitable for an extended temperature range from -40 … +75 °C and considerably extends their lifespan to up to 15 years.

Diagnostics options have been considerably extended as well: all zone 1 modules are now equipped with one or two LEDs per channel. Analog modules signal line faults via a red LED, while digital modules additionally display the switching status via a yellow LED. This makes it much easier to locate errors directly on site. All modules feature additional self-diagnostic functions according to NAMUR NE 107, enabling them to send a »maintenance required» alert in time before an actual failure comes to pass. On top of that, the need for maintenance is clearly signalled by means of a blue LED at the module. The status bit for process signals which characterises the quality of values as »good» or »bad» just like in fieldbuses is another new feature. As established by IS1, the new IS1+ generation is versatile and cost-efficient. Thanks to a consistently intrinsically safe structure with an intrinsically safe fieldbus, changes and extensions to the installed system are easily possible without shut-downs in hazardous areas (hot work / hot swap). R. STAHL draws on more than 30 years of experience in the systems business, know-how about all automation systems and corresponding bus protocols as well as international explosion protection and ship building certifications. Based on this comprehensive expertise, R. STAHL is fully capable of devising suitable IS1+ remote I/O solutions for installations anywhere in the world. 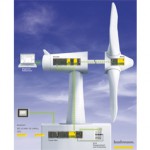 Bachmann automation solutions at the EWEA 2013 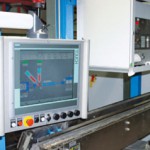