Automate 2013, North America’s leading automation event, was attended by a record 10,975 attendees from across the United States and 55 countries. The event took place January 21-24 at McCormick Place in Chicago.

“Automate 2013 exceeded all of our expectations,” said Jeff Burnstein, President of the Association for Advancing Automation, the primary sponsor of Automate 2013. “All of our numbers were up sharply, including total exhibitors (+17%), show attendees (+62%) and conference participants (+10%). Our post-show survey indicates that Automate is becoming the primary trade show in the field for many people, as about 50% of Automate attendees do not attend any other automation related trade shows.

“It’s clear that our message that automation is the best way to become a stronger global competitor is resonating with companies in virtually every industry,” added Burnstein. “Robot sales set a record in 2012, the Automate 2013 show was better than ever, and we expect these trends to continue as the manufacturing resurgence in the United States gains an even stronger foothold. We believe this will lead to an expanded Automate event when it is next held in 2015.”

“We couldn’t be more pleased with Automate 2013,” stated Joseph Cyrek, Vice President at Recognition Robotics, Inc. “The attendee traffic was fantastic. We generated many solid leads with potential users, some of whom were already asking for quotes to move forward with our technology. This has been a great show; everyone seemed really fired up about the industry. We will definitely come back for Automate 2015 with an even bigger presence.”

Automate 2013 also generated a large amount of press coverage, including the New York Times, Wall Street Journal, Barron’s, the Chicago Tribune, Univision, Chicago area TV news outlets NBC 5 and WGN, and many different trade publications. Much of the coverage centered on how using automation technologies displayed at the show can help save and create jobs, the opposite from what is often reported in the media. The Association for Advancing Automation is a strong advocate for this message, which was highlighted during a special CEO Roundtable at Automate 2013. To view a video summary of the CEO Roundtable, please click.

More than 75 industry experts from around the world gave presentations at the conference, including keynote speakers Steve Forbes, Chairman and Editor-in-Chief of Forbes Media and Henrik Christensen, Director of Robotics at Georgia Institute of Technology. Forbes’ talk was so popular that people were turned away once 1,000 people were in the room.

“Many of the sessions were geared to small and medium sized companies who are new users or considering using robotics, vision, motion control, and other automation technologies,” Burnstein asserts. “One of the featured sessions highlighted small company executives who have successfully automated in order to become stronger global competitors. These executives provided real-world examples of companies who would have had to either go out of business or send manufacturing offshore but instead succeeded by automating.”

Automate 2013 was collocated with ProMat 2013, sponsored by the Material Handling Industry of America. The next Automate Show and Conference will be held March 23-25, 2015 in Chicago.

Automate is organized by the Association for Advancing Automation, the not-for-profit umbrella corporation of the Robotic Industries Association (RIA), AIA – Advancing Vision + Imaging, and the Motion Control Association (MCA). Together these associations represent some 650 member companies from 32 nations that drive automation forward. Members include suppliers, system integrators, end users, universities, consulting firms and others involved in automation. 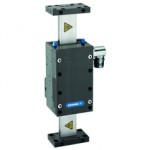