Using zenon, Sacmi built a combined machine that handles PET bottle blowing, filling and capping operations in record time. Use of vector graphics and wizards to create and modify objects has enabled the Italian Group to create a single interface for two machines, reducing costs and allowing independence from display resolution.

For those companies that represent the excellence of being `Made in Italy`, innovation and being inventive means being able to find effective solutions for new problems using the new combination of tools that technology has made available.

This description defines Sacmi, leader in the ceramics and plastics sectors and one of the best known Italian brands for packaging machinery for the Food & Beverage industry.

From pre-forms to filled bottles

Sacmi’s business in the beverage industry has been split up among four companies in the Group: the parent company, Sacmi Imola, Sacmi Filling in Parma, Sacmi in Verona (which includes the Sacmi labeling brand) and Sacmi Packaging in Imola: four top companies that manufacture reliable, flexible and functional machinery.In order to best respond to the needs of an industry that is undergoing significant transformation and so improve its competitive positioning, the Italian Group has decided, over the last few years, to also enter the plant design market. This has made it possible to offer integrated, turn-key solutions, enabling the processing of raw materials all the way to the finished product.

One of the most recent innovations developed by Sacmi in this regard is the Combo system, a machine that, as the name suggests, combines the functions of two stations: one a molder-blower and the other a filler

The Combo machine is a complete solution that begins with a pre-form and is capable of delivering a filled and capped bottle. The machine starts its work cycle by loading pre-forms and taking them to a lamp oven where they are heated. Once the pre-forms have reached the right temperature, they go into a mould and are blown. This process results in the bottle being made into its final form. After blowing, the bottle is inserted into a carousel for filling and capping.

Massimiliano Baruzzi, the HMI-Part Software Manager for Sacmi, recounted how the idea for the Combo system came about. “At the beginning Sacmi offered the filler machine developed in Parma; afterwards the blower machine was developed in Imola. After the new blower machine was field tested it was decided to build the combined machine in order to meet market demands for a single integrated solution for filler lines. Therefore, we had to come up with a new operator interface that both worked from two separate panels, for standalone machines, which we would have kept in production in any case, and with single display for the Combo solution.”

The idea to build a Combo system for blowing, filling and capping bottles arose in the month of January with the ambitious objective of completing the project by May 2011, in time to take the line to the Interpack Trade Fair in Düsseldorf. There was, therefore, very little time to commission and test the machine.

The original interfaces of the two machines had already been implemented with zenon, a tool that Sacmi began using in 2003, but significant standardization and new engineering was needed in order to give them homogeneity so they would function as a single unit with one display. “As we knew this tool’s characteristics and flexibility well, we had no doubt which software to use for the design of the new interface,” Baruzzi points out. 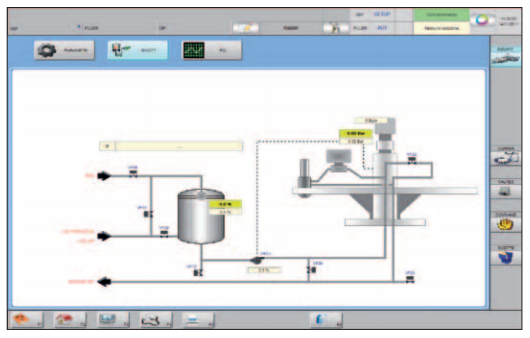 Using sub inclusion projects, Sacmi research and development engineers were able to accelerate industrialization of the system. “Choosing to use a SCADA instead of programming software – explained Baruzzi – had the aim of simplifying the creation of the interface. It was zenon that enabled us to develop the new interface without needing to test the parts of the code relative to the most common functions, which had already been tested and which were already operational in other projects. This way, we were able to concentrate on the creation of the value added components, such as organization of the data in each page, navigation, ergonomic features and the creation of those parts which commonly unified the data from both machines, making their use simpler. So, we were also able to speed up design and commissioning of the machine.”

Another important element which contributed in our choice of zenon was the vector graphics support. “The standalone machine panels and the display on the Combo line had different resolutions: 1024 x 768 and 1280 x 1024. Being able to use a single project design with different graphic implementations was fundamental for us,” Baruzzi explains.

In addition, zenon simplified work sharing among the different Sacmi divisions involved in the project. Actually, Sacmi’s machines are manufactured in the plants of different Group companies by various developers. “Because we had zenon we created a single archive of standard objects and parts on which all of our engineers could work whilst putting the final interface together. Unification of the libraries of objects and symbols and the follow-up standardized presentation of the operator interface, which also significantly boosted our image, enabled us to both save time and resources in the design phase and to simplify management of subsequent changes.”

subsequent changes.”Baruzzi had only good things to say about the support provided by the COPA-DATA technicians: “Expertise, fast response times and problem resolution examples were sent very quickly. 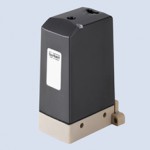 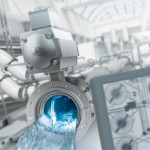