FANUC has introduced the latest version of its successful LRMate 200 robot. Ideally suited for integration into special purpose machinery the LRMate 200iD is now more compact, faster, has increased payload and a larger work envelope.

Weighing in at an overall 25kg the new LRMate is 2kg less than its predecessor and, combined with a reduction in arm width of 15mm, the compact unit provides a cost-effective handling or transfer solution for machine and system builders.

The six axes LRMate 200iD has an increased payload, up from 5kg to 7kg with an uprated wrist assembly making longer tool offsets possible. Increased joint speeds on every axes of up to 25%, together with wrist moment and wrist inertia improvements, have resulted in the LRMate 200iD being able to perform the industry standard bench test (25mm by 300mm by 25mm) with 1kg payload 35% faster at .32sec or 187.5 cycles per min.

Installation and access with the new arm is improved by the slim design and increased work envelope; reach is increased both horizontally and vertically. Its lower weight and ceiling, wall or floor mounting options allow integrators to design machines with ease of access to reduce lost production time when re-tooling or carrying out maintenance procedures.

Integrated signal cable and pneumatics are enclosed within the robot arm, from base to forearm mounted connectors, helping to prevent snagging in confined cells and speed up programming. In addition to air, input/output connections and three double-acting solenoid valves the LRMate is now equipped with integrated sensor, Ethernet and auxiliary axis cables. 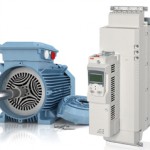 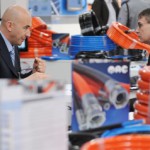