“For such an important and new development project we had to be as sure as possible with our choice of mainshaft bearing supplier”. So said Dong-Young Han, General Manager of System Engineering in Hyosung Wind Energy Division, responsible for one of the first 5 MW wind turbines expected to be erected in offshore Korean waters.

“Many parts of a wind turbine are important but if we talk about critical components, then the mainshaft bearings are certainly among those considered by all turbine manufacturers. These bearings are big, subject to very heavy and changing loads, and the generation of electricity cannot be made if they fail. Because the turbine is the first prototype of the series that we will supply to the Government initiated farm of 500 offshore turbines generating 2,500 MW, which will be Korea’s first offshore windfarm, we took the decision with great care to select SKF as the bearing supplier.”

“As all in the industry know, once these turbines, and bearings, are installed offshore they are exposed to the normal, but changeable, conditions of wind, rain, heat, variable loads etc, but in addition have to cope with salt water spray that puts additional emphasis on reliability of key components. Rectifying a bearing failure in a turbine out at sea can involve extremely high costs and is a complicated process due to the difficulty to get men and machinery to the ‘site’ in a way that enables the repair work to be carried out. With this in mind we looked to select a supplier with proven experience both in offshore wind turbines, and the design and manufacture of reliable bearings under such severe operating conditions.”

The Hyosung HS139-5MW turbine is a new project for the company who until now has produced 750 kW and 2 MW land based turbines. The scaling up to a 5 MW turbine for use offshore is not at all an easy thing to do, and a lot of engineering knowledge, calculations and test are needed to succeed. Regarding the choice of mainshaft bearing supplier Mr. Youk Song, Hyosung leader of drivetrain development explains, ‘we looked at 3 or 4 potential suppliers, but after thorough discussions in our team, quickly came to the conclusion that we felt SKF would be our best choice.

SKF has already delivered mainshaft bearings for other 5 MW offshore turbines in Europe and we felt their experience, engineering and calculation knowledge could be relied on.

Furthermore we had worked with them on our 750 kW and 2 MW turbines and were very happy with their calculations, bearing choices and the bearing performance, but also the cooperation and support offered with regard to a concern we had on drivetrain tolerances for our 2 MW turbine. Since that was a new turbine design for us at the time, we were not 100% sure of the drivetrain stack-up tolerances we calculated. SKF evaluated the tolerances, and we applied their recommended changes, which proved to be right thing to do. In addition we received full training on bearing mounting for the mainshaft, and their experience in these aspects of wind turbine design and construction was very useful and important for us.

Another important issue for the 5 MW project was that we had a very tight time schedule, and SKF assured us they could deliver all that was necessary to propose and verify design solutions. In view of our past cooperation with SKF we felt confident that they would meet our targets. And they did!”

The new 5 MW turbine is a relatively compact design and has a new drivetrain concept for the 5MW class of turbines. It’s axially stiff rotor shaft assists in reduction of shaft dynamics that improves gearbox reliability. And the gearbox is constantly centered using an elastomer hydraulic gearbox arm support. It will have a hollow rotor shaft supported by two bearings in a single housing. This ‘unit’ design of the bearing assembly eases handling and mounting, and will reduce the weight at the top of the turbine by an estimated 10-15% compared to other potential solutions.

The choice of bearing types represents a new combination, since the selected double row cylindrical bearing at the upwind end, and the double row taper roller bearing that is downwind is a combination not used in previous large size geared turbines, and can operate in offshore locations with wind conditions ranging from low to strong. The wind conditions at the Korean offshore location are, on average, relatively low; 6-7 metres per sec.

While the bearing types are basically ‘standard’, these particular bearings have been manufactured with special features to optimize carrying capacity for this application such as; use of slim roller sets in the 1500 mm bore double row cylindrical bearing, profiled outer races to accommodate contact stresses, a special inner ring for the double row taper bearing to improve the mounting, and case hardening of the taper bearing (radially and axially) to reduce the effect of shock loads that could lead to ring cracking.

The turbine will be assembled during 2012 and it is expected to gain full certification against the specifications required in the Government’s plans. The first two Hyosung offshore turbines are expected to be erected in the sea South West of Korea, as part of a 100 MW test site delivering electricity to the mainland. Further turbines will be added until 2019, when the full generating capacity will be realized. Summarizing what for Hysoung has been an exciting project Mr. Han said, ‘With this new first 5MW turbine we are very hopeful that many of the turbines that will finally be installed in the windfarm will bear the Hyosung name!” 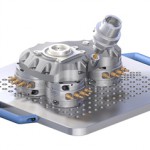 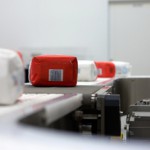