Presented annually by Deutsche Messe in conjunction with HANNOVER MESSE, the HERMES AWARD is one of the world’s most coveted technology prizes. An independent jury chaired by Dr. Wolfgang Wahlster, CEO of the German Research Center for Artificial Intelligence (DFKI), has nominated five firms for the HERMES AWARD 2013. The winner will be announced at the Opening Ceremony for HANNOVER MESSE on 7 April by the Jury Chairperson, accompanied by a congratulatory speech by German Federal Minister of Education Johanna Wanka.

“A nomination for the HERMES AWARD is a special mark of distinction for the contestants involved. This year the broad spectrum of applications underscored both the diversity of HANNOVER MESSE and the dynamic innovativeness of industry,” declared Dr. Jochen Köckler, member of the Managing Board of Deutsche Messe AG.

“We arrived at a consensus over the course of an exciting jury session – one which was marked by lively discussion and debate and sharply different approaches. This year’s applications had a strong focus on M2M communication for Industry 4.0 and new approaches to the conservation of natural resources. This year’s nominees are products which facilitate sustained innovation at a reasonable cost,” reported Wahlster.

The following firms have been nominated for the HERMES AWARD 2013 (in alphabetical order):

Bosch Rexroth AG, Lohr am Main: The nominated “Open Core Engineering” project represents a software solution which connects previously separate PLC and IT environments using a comprehensive portfolio of open standards, software tools, function packages and Open Core Interface. This new development opens up traditional PLC-based engineering to the benefits of high-level language programming. Open Core Engineering makes it possible to run innovative functions in the form of apps on external devices like smartphones, with native IT apps on smart devices not only able to read data, but also record it to the control system, providing OEMs with a new opportunity to gain a competitive edge by adding individual software functions without the direct support of the control system manufacturer.

Ebm-papst GmbH & Co. KG, Mulfingen: The product Diffusor AxiTop is among this year’s nominees. It consists of a diffuser designed to improve the efficiency of fans and reduce their noise emissions. To do this, the diffuser converts a large percentage of the dynamic speed energy from the exhaust air into static pressure by decelerating the flow velocity. This in turn is used to increase pressure on the fan blade. Apart from reducing energy consumption by 27 percent, the diffuser is made of a newly developed wood-plastic composite, epylen, which contributes to the product’s environmental friendliness.

Hirschmann Automation and Control GmbH, Neckartenzlingen: The nominated product here is OpenBAT – Industrial Access Point, which makes possible the individual configuration of industrial-standard Wi-Fi access points and clients via the Internet. This OpenBAT line is based on a new hardware and software technology, enabling rugged and failsafe wireless connections even in tough environments. The new Parallel Redundancy Protocol (PRP) supports redundant, loss-free communication in real time. The technology uses two parallel frequency ranges as redundant channels. The new generation of Wi-Fi devices achieves an increase in Wi-Fi network speed of up to 50 percent, with bandwidths of up to 450 MBit/s. Bandpass filters eliminate any interference from other wireless signals.

KAESER Kompressoren AG, Coburg: The nominated product consists of a latent heat accumulator combined with a compressed air refrigerant dryer. The heat accumulator is integrated with a heat exchange system in which all drying process steps are performed. The product makes use of the latent storage medium’s phase changes (solid/liquid) to achieve a substantially more compact design compared with conventional heat accumulators. While providing the same accumulator capacity, the new system reduces the accumulator mass by 98 percent, the floor space required by 47 percent, the weight by 60 percent and the amount of refrigerant by 53 percent.

Schildknecht AG, Murr: The nominated product, DE 7000, represents a gateway for cloud-based M2M solutions with a scalable number of users. Schildknecht launched its DATAEAGLE (DE) 7000 wireless module for practical implementation at the end of 2012. DE 7000 allows the user to establish a wireless transmission path between automation devices and mobile wireless networks. The objective is to make data from digital and analog signals as well as the PLC field bus level available in the cloud via wireless network and Internet. Given GPRS flat rates beginning as low as 4 euros per month and reasonably priced cloud services with encryption, the costs for more than 1,000 transmissions amount to only a few cents, translating into a very low-cost solution for entry into M2M communication, in which production data can be accessed via smartphones almost anywhere in the world. 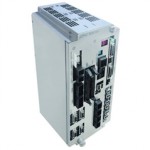