The FSU safety controller for MOTOMAN robots from YASKAWA allows robots to have smaller security zones and ensure optimal utilisation of the production area. An additional advantage is that multiple sub-processes can be carried out in the robot-human intersection at the same time. The relevant safety standards are maintained at all times.

With its array of security features, the new FSU control option can be used as an alternative to conventional guarding of robot cells. By means of software the working area of the robot can be limited in a safe manor and the robot is therefore unable to enter outside the defined safe working area, which means a smaller footprint of the cell. In addition the guarding may be of a lighter construction since the robot is no longer able to make contact with it. By implementing several security areas it is also possible for the robot to continue to work even when the safety door at the rear of the cell is open, whilst at the front components are fed manually. The safety speed monitoring function allows the robot and human to work together. If the operator enters the interaction area, the robot is either safe or moves within the legal safety speed.

A further security feature is the limitation of individual axes. For example, if the range of movement of the first axis of the robot, the S-axis, is limited, the control technology will reduce the movement range of the robot. In this case the guarding panels may also be designed smaller and lighter. An angle limitation can limit the allowed range of rotation for external axes. For example, a linear floor track no longer needs to be protected by the range of control switches.

The controller monitors the robot arm and external axes independently of each other on the stationary condition and movement speed. In addition a safety speed can be defined. If the stationary condition is interrupted or the safety speed is exceeded, the servo motors are switched off automatically. This makes it possible, for instance, for a new component to be loaded on one side of the table, whilst the robot is working on a second component on the opposite side. This means that part of the system can always remain in production. 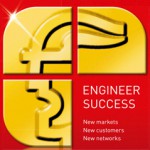 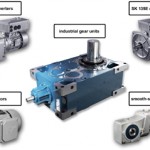 NORD DRIVESYSTEMS At the 2013 Hannover Fair