What is the quickest and easiest way to offer sophisticated 3D robot guidance to users? With its innovative standard product line, ISRA VISION has the answer: GigE sensors and newly developed software, in which ISRA VISION has integrated its 25 years of industry experience, making 3D robot guidance possible without expert knowledge. Production managers on the factory floor will be able to quickly and easily integrate ready-to-use sensors into their systems all on their own.

In today’s world, one hundred percent monitoring and fully automated processes using 3D robot guidance are key elements to achieve greater flexibility and higher productivity. Machine vision systems make the use of robots even more flexible, have demonstrated that they can reduce costs and also provide documentation of the manufacturing quality that without them would not have been possible.

Up until recently, users stayed clear of 3D robot guidance in many industry sectors. What was stopping them? The technology was too sophisticated and too complicated. We have now passed that stage. For any application, from 2D to 6D, an easy to use product line consisting of sensors and software, scalable in terms of resolution and accuracy and ready for use is now available for 3D robot guidance: install, connect and you’re ready to go! Instead of wasting countless hours programming, now you will only need to set a few parameters.

The GigE based sensors can be used in either stationary or mobile applications and provide the highest rate of accuracy even for large components. For example, MONO3D will make it possible to perform 3D measurements of position and orientation with a single sensor. The sensor determines all six degrees of freedom for a three-dimensional object using only three attributes. The lighting is already integrated in the sensor’s enclosure.

SHAPEMATCH3D makes use of multiple projected lines. Its primary application, when combined with 3D Form Matching, is for web-based robot guidance. Robust and highly accurate results are achieved because of the high redundancy of measuring lines.

Several single sensors can be combined to a sensor group. CONact MONO3D – here, several MONO3D sensors are combined making it possible to determine 3D coordinates of large objects with the greatest degree of measuring accuracy.

CONact STEREO3D is a jointly calibrated combination of STEREO3D sensors for large objects.

The multi-line sensors are combined to a CONact SHAPEMATCH3D group.

The SHAPESCAN3D sensor is designed to allow robots to perform bin picking, meaning to reach into the box. Even in the most difficult lighting conditions, the positions of lower level, randomly distributed objects can be determined three-dimensionally in different depths of large bins. The robot can remove unsorted parts directly from the transport bin and – without the need for complicated mechanical structures – can then feed them into the production process. As compared to mechanical separation, the robot’s ability to directly reach into the box brings with it the benefits of flexibility in the range of parts as well as cost reduction advantages, because the need for mechanical feed components is significantly lower.

The following applies to all sensors: The standard Gigabit-Ethernet (GigE) interface lets data be exchanged at extremely fast speeds. In addition, many other standard communication interfaces are supported, such as Profinet and Profibus. The robust sensors are supplied quickly and easily via Power over Ethernet (PoE).

The sensors are combined with new software technology, into which ISRA VISION has integrated its entire problem-solving skills. It offers a modern graphic user interface that allows the user to navigate intuitively on the touch screen to operate the system.

The new 3D vision automation will make it significantly easier for users to install and integrate them into their systems and processes. «Plug & automate» means that workers will now have the capability to install 3D robot guidance on their own and put it into operation immediately. The software is available in combination with the sensors, but is also sold separately. Users can determine for themselves exactly what they need for their systems. You can easily start working with 3D robot guidance in a flash, because instead of complicated programming, all you need to do is set a few simple parameters.

With its new philosophy, ISRA will be pioneering new application areas for 3D machine vision. The days when users had to rely on experts to efficiently automate their systems is now a thing of the past. With «plug & automate», users now have the freedom to use automation solutions of the future today. 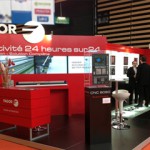 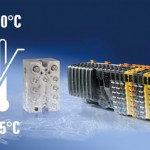 Compact thermal camera for use in hot working zones