A dynamic British company has harnessed the precision of robots, flexibility of machine vision and powerful laboratory automation software to push forward research into stem cells, pharmaceuticals, biotechnology and genomics.

paa (Peak Analysis & Automation Ltd), based in Farnborough, in conjunction with the Wellcome Trust Sanger Institute has developed automate.it pixcell, a flexible robotic system for precise detection, isolation and picking of part or whole stem cell colonies from Petri dishes. It then transfers the colonies to mircotiter plates ready for further development.

The system consists of a very high precision robot, originally developed for use in the semiconductor industry, a high resolution camera, an illumination system and a unique picking head. The whole system is enclosed within a Class II certified cabinet, ensuring sterility.

The system ensures gentle handling of the stem cell colonies, improving the likelihood of them growing and thriving. It also frees up researchers from repetitive picking tasks so that they can concentrate on other high value activities. It operates at a level of performance equal to or better than trained staff, picking up to 96 colonies in 15 minutes.

The robot at the heart of the pixcell is the Mitsubishi Electric RP-Series, which was designed specifically for micro-handling. It operates with a placement accuracy of 0.005mm or one-tenth the width of a human hair, with a picking cycle time of less than 0.5 seconds.

The robot is very compact, so fits comfortably within the cabinet. It is usually used for precision manufacturing purposes, such as assembling watches, mobile phones and hearing aids or for populating printed circuit boards with semiconductors. However it is designed to be flexible and once fitted with a suitable working head can be used in an almost infinite range of micro-positioning applications.

In use, a Petri dish is placed on the automate.it pixcell instrument picking plate and is quickly scanned by the camera, which is traversed over the dish by the robot arm. An image analysing algorithm then identifies cell colonies based on their morphology. At this stage, an operator can select those colonies to be picked, or picking of all appropriate colonies can proceed automatically. This is thanks to the paa Overlord3 laboratory automation software. Overlord3 is simple to use, it combines instrument control with high performance scheduling – ensuring optimum throughput and error free assay results.

The robot then combines X and Y movements to place the picking head adjacent to a colony, then lowers the head through a layer of buffer liquid until it touches the bottom of the dish. A microscopic precise sideways motion then scoops the colony into the head. The freed colony is drawn into the picking head along with a tiny drop of the buffer. This unique procedure reduces the risk of damage to the cells to a minimal level ensuring their viability.

With another rapid sequence of robot moves, the head is lifted clear and the robot transfers the colony to a waiting microplate. The final step is to pass the head through a cleaning station so that it is ready for its next pick. Ron Belchamber, Managing Director of paa says: “The Mitsubishi Electric RP is one of the few robots available that can perform to this level of consistently over extend periods of time. It is certainly making a major contribution to many areas of advanced life science research.” 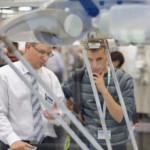 The role of industrial automation in “ReMade in Italy”: listening and dialogue with the protagonists of SPS IPC Drives Italia