As one of the most popular products in ABB’s wide range of robotic offerings, the IRB 1600 plays an important role in many industrial applications. From machine tending and material handling to arc welding and cutting applications, IRB 1600 is a versatile machine.

To extend the usefulness of this already adaptable robot, ABB has upgraded the IRB 1600’s top payload from 8 kg to 10 kg. The increased payload expands the already-large range of general industry applications the IRB 1600 can serve. The improved payload is available for both the 1.2 meter and 1.45 meter robot variant.

“The IRB 1600 was already able to work in some incredibly diverse and demanding environments,” said Per Lowgren, Product Manager. “This upgrade is an important step in maintaining the IRB 1600’s leadership role and will allow our customers to increase productivity with shorter cycle times and higher payloads.”

The IRB 1600 is already well-known for its combination of accelerations and accuracy. Second generation QuickMoveTM motion control and the low friction spur gears help cut cycle times by up to 50 percent compared to competitor robots. Meanwhile, ABB’s TrueMoveTM technology and a stiff design enable superb path accuracy even at high speeds.

“With IRB 1600, significantly increasing the output and ensuring improved work piece quality should be a realistic expectation for many users,” said Per Lowgren. “As a company we are proud to offer our customers this competitive edge while providing an energy efficient robot with noise levels that are lower than that of the competition.”

The upgrade improves upon the IRB 1600’s other existing advantages, such as solid protection for use in harsh environments (IP 67 and Foundry Plus 2) and total mounting flexibility. The 1.2 meter reach variant also makes the robot more dexterous in confined spaces for improved reach and flexibility.

All ABB Robotics’ products are fully supported by the ABB Robotics’ global sales and service organization in 53 countries and over 100 locations. 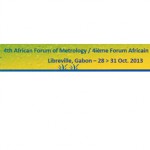 4th Metrology Forum from the 28th to the 31st of October 2013, Libreville, Gabon 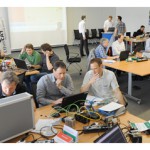 Yamaha to demonstrate the power of robot teamwork at Automatica 2022