At this year’s components show, which is being staged in parallel with interpack, Mitsubishi Electric Europe and Swiss robotics specialist Robotronic are jointly presenting a brand new handling solution for supplying pre-filled syringes to an end-of-line packing system. The unique concept takes up very little space, yet offers a high processing rate of up to 600 syringes per minute and the option of switching quickly and easily between various syringe and carrier formats.
The solution presented at the components show, supplies disposable syringes quickly and flexibly to the packing process via a rail system. It consists of two modular robot cells developed by Robotronic, so-called MRTs (Modular Robot Technology). In one cell, two precisely coordinated Mitsubishi Electric MELFA robots of the RV-4FL series assume responsibility for handling all tubs and syringe carriers as well as the various syringe formats from 0.5 to 10 millilitres. To do this they have a suitable conversion option. The second cell contains a rotating magazine turret, which conveys up to 20 tubs filled with the syringe carriers into the system.
Measuring just 1 x 1.30 metres, the MRT basic module occupies a space slightly smaller than a europallet and is 2.20 metres high. Mike Weber, the owner and managing director of Robotronic AG, says “Similar handling machines have been on the market for a long time. What makes our MRTs unique is their compact design. A comparable machine from another manufacturer takes up roughly three to four times as much space – and space is usually in short supply in production systems.” The concept comprises a complete set of components, which can be assembled specifically to suit the requirements. As the exclusive robotics distribution partner of Mitsubishi Electric for the Swiss market, Robotronic uses only Mitsubishi Electric Robots.
The two compact overhead articulated-arm robots can perform both renesting and denesting tasks and process 400 syringes per minute in the sample application. The output of the cells can be increased to 600 syringes per minute by integrating an additional axis. The rotating turret, which is driven by a Mitsubishi Electric MR-J4 servomotor, is used to reload the MRT while the process is ongoing, thereby reducing idle time to a minimum. To achieve the same level of autonomy with a conveyor belt, the belt would have to be four metres long.
“Mitsubishi Electric’s industrial robots are distinguished by their flexibility, speed and reliability over many years. The broad scope they offer in construction, for example due to overhead mounting or extreme rotary movements, is also advantageous. The slender form of the robots aids us in realising MRTs a the minimum of space,” stresses Mike Weber.
Handling solution for vials
Robotronic has also developed a made-to-measure overall concept for the supply and packing of vials of different sizes, which likewise incorporates two Mitsubishi Electric MELFA robots in the RV-4FL series along with a total of twelve type MR-J4 servo drives all operated by the Mitsubishi Electric iQ Platform. The unit comprises two MRT cells, each with a 6-axis robot, and can be expanded to virtually any extent. A conveyor system with eight servo-driven positioning screws supplies the vials to the robots, which are responsible for handling. These use vacuum grippers to remove two rows of vials containing five vials each from the conveyor and put them into waiting packing units. The machine’s processing speed is 300 vials per minute.
The dynamics of the Mitsubishi Electric servos come into their own especially in the conveyor system with its fast acceleration and high braking torques combined with a very gentle start-up and deceleration. This high level of precision is important in the indexed conveying system of the packing units, because the machine has to position new blisters every 300 milliseconds to keep pace with the second-by-second cycle of the boxing supply chain.
The components fair is staged in parallel with interpack, the world-leading fair for the packaging industry and related process technologies. The show takes place from 8 to 10 May 2014 in Düsseldorf. Mitsubishi Electric’s show stand is in hall CS, stand 118. 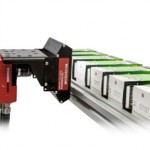 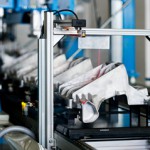 Assembly and Handling Technology in AUTOMATICA 2014

Interpack 2023 meeting of the processing and packaging sector