The subsidiary of the Bongrain Group is pursuing a policy to reduce its energy usage and CO2 emissions by investing in a facility designed by Cofely Axima, a leader in industrial refrigeration and a subsidiary of GDF Suez. This solution stands out for its use of a process that heats and cools within a single cycle and its use of key components supplied by the Emerson Group – a Vilter single-screw compressor from Emerson Climate Technologies and a Leroy-Somer variable-speed drive from Emerson Industrial Automation.Vilter single-screw compressor driven by a Dyneo® PLSRPM permanent-magnet synchronous motor

La Compagnie des Fromages is part of the Bongrain Group, the world’s fifth-largest milk-processing company and an employer of 18,870 people.

«Because we serve as a consultant to our customers, we conducted an energy audit with la Compagnie des Fromages’ plant in the town of Vire,» says Jean-Yves Druillennec, Sustainable Development Manager for Cofely Axima-GDF Suez. The audit, which was based on a series of measurements, provided a snapshot of the Vire plant’s consumption levels and suggested replacing its four piston compressors, which provided only cooling, by a thermorefrigerating pump.

A thermorefrigerating pump is a thermodynamic heat-transfer system that can cool and heat at the same time. The refrigeration system makes it possible to provide cooling capacity to the evaporator and heating capacity to the condenser. When 1000 kW of chilled water is produced at Vire, 1300 kW of energy is recovered at the same time and combined with just 100 kW of electricity to heat water to +62°C. All the energy produced and used is fully recovered. A 150 m³ buffer storage unit allows energy to be used to produce hot water as needed by the process (particularly cleaning operations). With the old system, this water was heated by gas, which has a much higher carbon footprint. In addition, the heat produced was rejected to the atmosphere by a cooling tower instead of being recovered and reused. The new system saves 9000 m3 of water a year and has reduced use of the cooling tower, which, with its plumes of steam, always reflects negatively with local residents.

At the heart of the system are a 390 kW motor and a variable-speed drive.. Both are made by Leroy-Somer and power a Vilter single-screw compressor with 1000 kW of cooling capacity. The refrigerant circulated in the system is ammonia (NH3), a natural heat-transfer medium commonly used cases such as the present one. Cooling and heating are simultaneously produced for one-third of the time. To raise the water temperature from 15 to 58°C (with a combined COP* of 7.67), the ammonia, after having removed heat from the cold side to produce chilled water, is compressed to achieve the right pressure and temperature. As this temperature is much higher than the usual temperature for a conventional cooling system, the ammonia condenses at 59°C. The water is heated by transferring the heat from the ammonia via the condenser and other heat exchangers located at various points in the system for heat-optimisation purposes.

During the remaining one-third of the time, chilled water is produced conventionally with a COP of 5.75. Ultimately, the system will recover all the heat extracted during the production of chilled water.

An 18-month return on investment

Chilled water at 1 to 7°C and 200 m3 of hot water at 60°C are produced daily at the Vire plant. To do this, the old system consumed an average of 820 kW of energy per tonne of production per year. With the new system, this level is now only 560 kW. «As a result, the payback period is particularly short, even when you factor in the aid, which amounts to less than 20% of the funding,» says Patrick Marie, Maintenance Manager of la Compagnie des Fromages. «The process for producing heat with less grid electricity is not the only source of energy savings,» says Jean-Yves Druillennec. «The use of much more energy-efficient components is the other source.»

«It is 7% more energy efficient than high-efficiency induction motors, which is significantly beneficial in terms of profitability, especially considering that electricity costs are expected to rise by 25% in the next five years. What sets this motor apart is that it is ideal for speed control. We noticed that some induction motors were under excessive load under non-steady-state conditions. We don’t have this problem with Leroy-Somer’s motors. They stay reliable whatever the load applied to them. Had we used induction motors, they would have had to be oversized.»

The low losses of the magnet-rotor technology considerably reduce heating of the bearings. As a result, they need to be lubricated much less often and the life of the motor is increased. «We’ve implemented more than 30 applications in four years without experiencing the slightest problem,» adds Jean-Yves Druillennec.

Vilter technology for greater reliability and energy efficiency Vilter is a brand of Emerson Climate Technologies, which employs more than 16,000 people worldwide. Instead of standard twin-screw compressors, the company uses a highly distinctive process – single-screw compressors.. Compression is accomplished by a single screw and two star-shaped gaterotors. The compressor is designed to balance the single screw both radially and axially. This balance ensures that very low loads are placed on the bearings, thus achieving a high level of reliability with considerably reduced vibration and noise levels. This design allows Vilter to offer its exclusive 5/15 warranty (5 years for the compressor and 15 years for the bearings).

The key to the single-screw compressor´s high energy efficiency is Vilter´s exclusive ParallexTM slide system, which allows the compressor to run at optimum efficiency throughout its capacity range. The capacity and volume slides (with an expanded volume ratio of 1.2 to 7.0) move independently of each other under all operating conditions, eliminating over- or undercompression and saving motor horsepower. «What makes these compressors stand out is their ability to independently adjust their capacity and volume ratio. That makes a real difference under partial load conditions. We have always found Vilter compressors to be clearly more energy efficient than the standard twin-screw technology. Depending on the application, they can be as much as 10% more efficient,» says Jean-Yves Druillennec.

It’s the total cost that counts

Cofely Axima was in charge of managing every aspect of the project, from engineering and installation, to control and supervision (PLC control, instant performance monitoring and traceability of all parameters). Only the electrical wiring was contracted out. La Compagnie des Fromages’ process was down for only 3 hours, during the commissioning phase. Cofely Axima is installing many systems in countries such as Thailand, Kuwait and Italy. «We are seeing a downward pressure on prices. Our clients are interested only in solutions that pay for themselves in less than two years. It is important to be able to make promises that you are sure you can keep. Overall, Emerson’s solutions are more efficient and reliable and much more flexible for non-steady-state conditions. The entire system makes it possible to make a real difference on the total cost,» says Jean-Yves Druillennec.

*COP: The Coefficient Of Performance expresses the energy efficiency of a machine and corresponds to the ratio of heating or cooling provided to electrical energy consumed. The higher the COP, the lower the electricity bill. 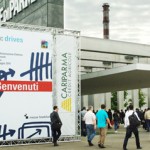