Current bionic projects and Future Concepts at the SPS/IPC/Drives

Festo shows with its bionic projects and Future Concepts at the SPS/IPC/Drives how the future of automation technology could look like.

When cooled to a certain temperature, superconductive materials can “freeze” the field of a nearby permanent magnet and hold it in suspension at a fixed distance. The stable air gap thereby produced allows the contactless storage and movement of objects without friction loss or the need for control mechanisms.

A wide range of possible applications
A conceivable application in automation technology of the future would be the energy-efficient, stable positioning of objects, without the requirement for measuring or control technology. Superconductors would also enable objects to be moved beyond walls in confined spaces and in all positions. In view of this non-contact handling, there is also great application potential wherever equipment is required to be cleaned conveniently or during operation, for example in laboratory automation, medical technology or the food industry.

SupraShuttle: hovering and moving in any direction
With the SupraShuttle, Festo is demonstrating the movement of a levitating object in all directions and, for the first time, the handling of the superconductor element itself: the cryostat with the superconducting material is transferred from one electric axis system to another. The exhibit also shows how easily hovering objects can be introduced into a hermetically sealed space and moved within it. This feature would be useful, for example, for applications involving work with gases or in a vacuum.

eMotionSpheres – Collision-free motion of autonomous systems in an area
The eight white spheres fly in all directions above the heads of those watching, before the random movements develop into an organised formation. Suddenly, one of the spheres detaches itself and the others follow it like pearls on a string. The perfect line turns into a sine curve in the air until the spheres form a circle. These flight manoeuvres are part of an elaborate choreography displayed by this year’s eMotionSpheres flying objects.

Networking in three-dimensional space
With the eMotionSpheres, Festo shows how several objects can be coordinated without colliding in a three-dimensional space thanks to multifaceted networking. Ten cameras installed in the room record the spheres via their active infrared markers (infrared LEDs) and pass on the position data to a central master computer. The actions calculated are sent back to the objects, where they are locally implemented. On the computer there are preprogrammed paths, which specify the spheres’ flight paths when flying in formation. Thanks to additionally stored behaviour patterns, the spheres can equally move autonomously through the space, however. The knowledge gained from the work on the BionicOpter in 2013 went into the design of the adaptive propellers. The developers pursued the wing principle on the artificial dragonfly and transferred it to the unique drives used by the spheres. 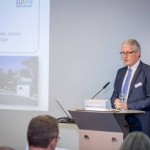 YASKAWA at SPS/IPC/Drives 2014: Efficient Solutions are the Key to the Markets 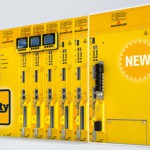