The automation of the fourth industrial revolution is accelerating: By 2018, around 1.3 million industrial robots will be entering service in factories around the world. In the high-revenue automotive sector, global investments in industrial robots increased by a record-breaking 43 percent (2013-2014) within one year. Viewed on a cross-sector basis, the international market value for robotic systems now lies at around 32 billion US dollars. So says the 2015 World Robot Statistics, issued by the International Federation of Robotics (IFR).

The robotic density figure is a key performance indicator for gauging the current degree of automation within the international markets: For example, the average global robotic density in producing industries lies at 66 robot units per 10,000 employees. A total of 21 countries have an above-average robotic density (Fig. 1). More than one-half of these highly automated countries are located in the European Union (14 countries). Then there are three Asian economies (South Korea, Japan, Taiwan), as well as the USA and Canada.

The current global leader in industrial robotic automation is South Korea. In this instance, the robotic density exceeds the global average by a good seven-fold (478 units), followed by Japan (314 units) and Germany (292 units). At 164 units, the USA currently occupies seventh place in the world.

At 36 units per 100,000 employees or about half the global average figure, China is currently in 28th place. Within the overall global statistics, this is roughly on a par with Portugal (42 units), or Indonesia (39 units). However, about five years ago, China embarked on a historically unparalleled game of catch-up aimed at changing the status quo, and already today it is the world’s largest sales and growth market for industrial robots. 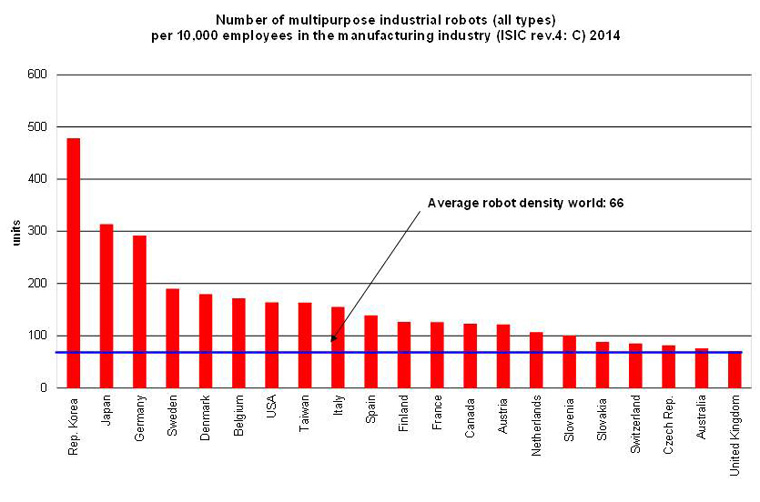 Never before have so many robot units been sold in one year as were sold in China in 2014 (57,100 units). The boom is continuing unabated in line with the forecasts: In 2018, China will account for more than one-third of the industrial robots installed worldwide.

«The robotic boom is laying down an important milestone in the realisation of the fourth industrial revolution», says Joe Gemma, President of the International Federation of Robotics. «With their digital interfaces, industrial robots can be seamlessly integrated into the networked structures of smart factories. This is a benefit exploited by highly automated economies and by countries adopting a new industrial focus. Further impetus is coming into the form of the technological breakthrough in human-robot collaboration: Robotic workers will in future be found working hand-in-hand with human staff, helping to replace traditional, rigid production processes with flexible structures.» 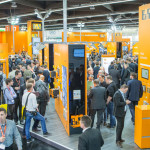 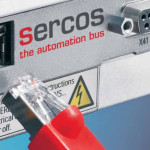