With the Locator software component from Bosch Rexroth, mobile robots independently determine their position. Users need neither expert knowledge nor concrete constructional devices to commission the component. The solution for position determination and orientation in any environment thus simplifies the automation of intralogistics tasks in industry and trade or, for example, in hospitals. The Locator is compatible with numerous industrial controllers and laser sensors from various manufacturers and is suitable for vehicles of all sizes and drive types.

Until now, many users have shied away from the effort required to introduce autonomous guided vehicles (AGVs) and autonomous mobile robots (AMRs). Project durations are often several months and the areas of application in the hall must be equipped with marking strips, reflectors or mirrors. Afterwards, specialists start to manually train the mobile units to their environment.

The software component Locator replaces this project effort with a quick and easy commissioning without expert knowledge. To do this, the software from Bosch Rexroth evaluates the signals from a laser sensor in the vehicle and converts them into coordinates in space. No permanently installed aids, such as markers or reflectors, are required for orientation and position determination. Users only need one click to start up the system and learn the vehicle with a one-time orientation drive. An intuitive user interface based on 3D technology is provided for this purpose. Similar to a computer game, the software maps an initially unknown environment and automatically creates a map.

The Locator stores this map on the vehicle itself or optionally on an on-site server component also offered by Bosch Rexroth. If several vehicles are used, they all access this map. Afterwards, immediate localization is possible without initial knowledge.

If a vehicle detects a change in the environment, for example by setting up a new storage location, it sends this information to the server, which automatically updates the map accordingly and sends it to all the vehicles in the fleet. Vehicles purchased subsequently with the Locator take over the server data when they are put into operation and can drive off immediately.

The Locator can be used in a wide variety of vehicle types, industries and applications. The software is independent of the hardware used by a vehicle manufacturer. As an encapsulated function block, it fits into numerous control systems and supports a wide range of laser sensors, including safety lasers. On request, Bosch Rexroth also supplies the software with its own control unit. The Locator is already being used by various AGV and AMR manufacturers in series production vehicles. 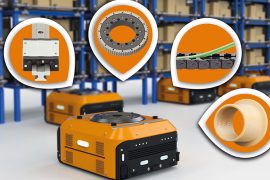