The employment situation in the mechanical and plant engineering sector remains tense. In August 2020, the number of employees decreased by another 2,165 million to 1.025 million compared to the previous month.

This means that almost 41,000 fewer people are employed in mechanical and plant engineering (minus 3.8 percent) than in August last year.
«Larger declines could be avoided thanks to the extended short-time work regulations,» says VDMA chief economist Dr. Ralph Wiechers.

At the end of September, 64 percent of the machine and plant manufacturers interviewed by the VDMA in its regularly conducted flash surveys had registered short-time work. The percentage of companies that have imposed a hiring freeze is comparably high. The overwhelming majority of those interviewed hope to be able to avoid further interventions.

However, according to the VDMA survey, almost one in four mechanical engineering companies (23 percent) cannot avoid a significant reduction in personnel. Of those companies that have already initiated interventions in their core workforce or plan to do so in the foreseeable future, three quarters expect job cuts of between 5 and 15 percent 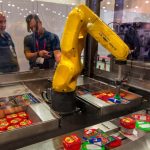