SwissDrives AG, the Yaskawa technology partner based in Steinach, Switzerland, has developed a large-scale drive solution for a complex cheese curing system in Austria. One key element in this ambitious automation concept is the total of 40 frequency inverters with integrated GA500-series ProfiNet option cards from Yaskawa.

A large number of curing steps are required to ensure that the cheese is perfectly matured. As this example from the large-scale Austrian cheesemaker shows, the task of automating such a process is technically demanding, but possible: a newly developed system at the facility will take over the processing of semi-hard and hard cheeses in various forms including wheels, blocks and tubes.

Frequency inverters play a crucial role in controlling the various processes. In the search for a suitable model that was reliable, rapid and efficient, the cheesemaker was focused on control quality but also on two other requirements: first, it had to be possible to seamlessly integrate the inverters into the existing control environment. Second, they needed to be robust enough to withstand the harsh environmental conditions of the food industry. For instance, the system is cleaned with disinfectant on a regular basis.

Faced with this challenge, SwissDrives, the automation specialist commissioned with the task, opted for the GA500 frequency inverter model from Yaskawa. Forty of them in total were used in the system.

The inverters are integrated into the ProfiNet control network for the system via a specially programmed function module. As a software solution, the ProfiNet function module integrates all the Yaskawa frequency inverters into the existing controller and supplies extra information from the inverters to the PLC. Furthermore, it also allows for the use of a large number of additional frequency inverter functions.

The benefit to the customer is that only one ProfiNet function module is required. This function module can be adapted for each frequency inverter. The function module allows all the Yaskawa frequency inverters to be efficiently integrated into the existing PLC and the finished interface will become the customer’s standard for subsequent projects. The ProfiNet function module can be used for all Yaskawa inverters from the GA500, GA700, A1000, U1000 and V1000 series. “Our function module rapidly and efficiently integrates into the existing PLC, and can be put into operation by a PLC technician just as quickly and easily,” says SwissDrives. SwissDrives develops tailored drive and control solutions optimized to specific applications and their various versions.

The GA500-series AC micro drives from Yaskawa enable extremely efficient motor control for various motor types and are outstandingly flexible in terms of interfaces. Their main functions include an integrated EMC filter, the two-channel safety function STO with SIL3/PLe, control of up to five inverters using just one fieldbus card, as well as intuitive and convenient setup and monitoring via smartphone apps. The devices combine a compact size with high performance.

Thanks to their robust design, the compact inverters can also be used in hot environments of up to 60° C. The boards are coated as standard to protect them from dust and moisture. The temperature-controlled cooling fans run only when needed, which minimizes dirt and extends maintenance intervals. A bright LED display and tactile keypad ensure easy and intuitive navigation through the menus. Users of Yaskawa inverter drives will be familiar with the tried-and-tested layout and naming of the menus and parameters, which minimizes the need for training. 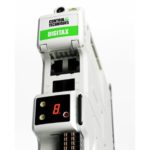 Control Techniques smallest servo drive has just been made smarter 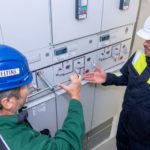