Tecnoideal, an integrator specializing in the medical sector, has recently introduced new ABB industrial robots into its automated applications. Based in Modena, Italy, the company designs, exports and installs its machinery solutions all over the world, opening new possibilities for the fast, efficient and safe production of disposable medical devices.

With ABB’s IRB 1200 and IRB 1300 robots, Tecnoideal can guarantee compliance with safety standards across the world, while delivering an extremely high production speed – fundamental aspects in medical device production.

Tecnoideal has a long tradition in the production of industrial machinery and automation. In 1990, the company was transformed following its acquisition by Medica Srl, one of the first companies to provide worldwide consultancy for the production of disposables for dialysis and infusions. Tecnoideal thus became the technological arm of Medica, augmenting its existing expertise in research and consultancy and providing new technology and automation solutions for its customers. Today the company can assist its partners and customers from conception, feasibility, and design, right through to installation and commissioning.

“We do not consider ourselves only integrators of automation parts” says Matteo Tedeschini, Sales Manager, Tecnoideal, “What differentiates us is the know-how gained over our decades of successful operation, and the experience we’ve gained specifically in the production processes of medical devices. A filer can be produced in several different ways, but only a deep knowledge of the critical issues and safety standards can determine the appropriate machinery and processes to be put on the actual production line.”

The vast experience within the company helped to inspire the company’s flagship product: the solvent dispenser. This innovative technology has revolutionized the concept of assembling medical components, while also avoiding dangerous contamination, and avoiding contact between operators and waste material. Following its strong growth in Italy and other territories, Tecnoideal is now branching out into the United States, where it currently operates an office in Maryland.

“The greatest challenges of our work are related to the final product, specifically those intended for use in hospitals and in contact with patients” continues Tedeschini, “The production of medical devices is governed by stringent quality measures designed to protect those who use them. However, at the same time, these disposable devices must be produced on a large scale and at a low unit cost”.

In response to these challenges, Tecnoideal enlisted the help of ABB and its robotics division to see where robotic automation could provide benefits to production processes. Many modern robots are ideally suited to carrying out fast, repetitive tasks with an extremely high degree of accuracy, making them a perfect match for Tecnoideal. ABB’s IRB 1300 robot, for example, has been installed on an automated system for the finalization of dialysis filters. Its task is to grab a filter and turn it quickly to allow the insertion of four caps at its ends. The task itself is relatively simple, but the robot can carry it out faster and with fewer mistakes than even a highly trained human could. This has helped to revolutionize the product system, making it less slow and cumbersome, while practically eliminating mistakes.

“Medical device manufacturers are increasingly looking to robots to help them deliver the high level of final product quality demanded by their customers.” says Tedeschini, “For example, the dialysis filters must come out perfectly from the production line, with the caps always inserted in the same way, and with the same force. Previously we would have had humans carry out this task, but with such a tedious job personnel typically found it exhausting, leading to errors creeping in. As a result, we needed further quality checks which, along with the additional labor required, increased the unit cost for each component.”

Tecnoideal has also found in feedback from its customers that the robots’ small footprint is a great advantage. More streamlined than other mechanical systems, the robots allow manufacturers to free up space in the clean room – a sterile environment with controlled humidity – or reduce its size, reducing costs all round. In America, a multinational customer has installed an ABB IRB 1200 robot as part of a Tecnoideal solution. In addition to grabbing and moving plastic tubes, the robot performs the important task of checking and identifying the dimensions, eliminating unsuitable pieces, counting pieces, and then selecting them for subsequent wrapping. In the design and simulation stage it was clear early on that the robot would outperform any conventional manufacturing technologies, while also equipping the customer with additional flexibility.

Tecnoideal is eager to incorporate robotics into more of its automated solution, as Tedeschini explains: “Customers often give us extremely complex specifications in terms of safety and efficiency, and increasingly the only way to meet these is by using robots. In our experience, ABB Robotics are the best on the market. What sets ABB apart is that they are not mere suppliers. We sit at the table together and collaborate to develop the optimal solution for an application based on production needs. And the robots deliver every time, with many customers now specifically asking us to include ABB robots in their automated systems”.

As for what the future holds for Tecnoideal, Tedeschini expects an increasing amount of collaboration between robots and production personnel across the manufacturing process: “We have already experimented with the intermittent collaborative mode on the IRB 1200. Thanks to the Safe Move Pro package, the robot becomes collaborative by slowing down its activity or putting itself in stand still mode in the presence of an operator. This is an effective and vital measure that guarantees safety in production areas where human supervision is required. We’re also looking at implementing ABB’s YuMi robot islands.”

“As manufacturing, particularly in medical devices, becomes more and more complex, there is simply no substitute for the flexibility, productivity and efficiency of robotic automation” concludes Tedeschini. 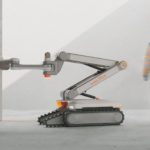 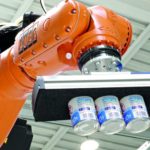