ETHERLINE GUARD monitors the service life of a data cable

Predictive maintenance is an important tool for avoiding unplanned machine downtimes. For this LAPP provides the new ETHERLINE® GUARD, which monitors the service life of a data cable at risk of failure in Ethernet-based automation technology networks.

Although cables usually last for many years, in situations with highly dynamic, demanding movements with high speeds and strong torsion, it is advantageous and cost-effective to monitor the connection systems in order to avoid unexpected downtimes which impair productivity. ETHERLINE® GUARD is the innovative solution from LAPP. It is a stationary monitoring device that evaluates the current performance of a data cable and specifies it as a percentage.

This is based on data from the physical properties and the related data transmission using sensors. The real-time status display enables the wear limit of a cable to be detected and the optimum replacement time to be planned in advance. LAPP especially recommends ETHERLINE® GUARD for data cables in accordance with the transmission standard 100BASE-TX (up to 100 Mbit/s) in accordance with IEEE 802.3, but also for EtherCAT, EtherNET/IP and 2-pair PROFINET applications, such as the ETHERLINE® TORSION Cat. 5 or the ETHERLINE® PN Cat. 5 FD. These cables are used in many industries in the last few metres or at the process level of an application and are therefore often part of cable chains or torsion-proof cable routing, such as those used in robot arms. The ETHERLINE® GUARD is suitable for mounting on top-hat rails and can be used for control cabinets thanks to its protection class IP 20.

The innovative guard for data cables has a particularly space-saving and compact design, as it is slightly smaller than a standard deck of cards (49 mm wide, 76.5 mm high and 36 mm deep). The device is operated with 24 V DC, is intended for a temperature range of -40°C to +75°C and is resistant to vibrations and shock in accordance with DIN EN 60529. A data cable node is connected between the critical application or the cable to be monitored and the controller side. For this purpose, the device has a GUARD/data port for the data cable to be monitored with RJ45 connector, which is routed from the critical application to the device, as well as a DATA port for the data cable with RJ45 connector, which is routed from the device to the controller. The maintenance data can be transmitted to a higher-level controller by connecting a third data cable to the LAN socket (PM03T variant) or by using the antenna connection for WiFi (PM02TWA variant). Both variants can be configured for cloud communication with MQTT. The external SMA antenna connection guarantees a safe transmission path when the device is in the control cabinet, for example.

Easy to put into operation

In addition to the standard LEDs, there are three centrally arranged multi-colour diagnostic LEDs on each RJ45 port: PWR for operational readiness, STATUS for the status of the data cable to be monitored and COM for Connect (LAN version) or WiFi (WiFi version). The developers at LAPP purposefully only provided simple diagnostic and adjustment options with the device. Commissioning is carried out in just a few minutes using automated and self-learning parametrisation (“teach-in”). Start simply by pressing a button or using the web interface. Another advantage is that no brand-new data cables or changes to the cable design are required for the application. This means that upgrading is possible at any time.

The patented predictive maintenance algorithms from LAPP make it easy to detect irregularities in the analysed data. The two digital outputs Q1 and Q2 enable the cable status to be output as a switch signal or as a pulse-width-modulated analogue signal, whereby the alarm threshold for the switch output Q1 can be specified by the user. Both the LAN and WiFi variants can output the cable status via MQTT. The LAN variant has the LAN-RJ 45 connection, while the Wi-Fi variant communicates wirelessly. The ETHERLINE® GUARD continuously calculates the cable state as a percentage and triggers an alarm if the performance or transmission properties of a cable deteriorate and there is a risk of failure. The alarm threshold is set to 80 percent ex works, but can be individually adjusted between 99 percent and 21 percent. With ETHERLINE® GUARD, LAPP takes customers another step on the way to the Smart Factory – bring it on! 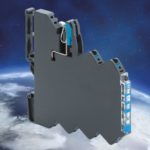 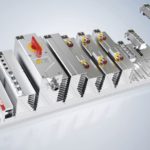 The MX-System: Where the controller becomes a modular control cabinet