Whether for labeling or palletizing, various pick-and-place applications or conveyor lines: safe and at the same time fast processes can be made possible by means of vacuum grippers on collaborative robots (cobots for short). With the ZXP-X1 series, SMC already offers a solution that, thanks to plug-and-play for various cobot manufacturers, reduces the time required for their installation and maintenance and shines with a high level of flexibility for a wide variety of applications.

Industrial automation is a highly diversified field in which customer requirements can change quickly again and again, while consistently high requirements are placed on process reliability, which have an impact on maintenance and servicing.

Vacuum grippers on cobots are no exception: SMC, the specialist in pneumatic and electrical automation, has expanded its ZXP-X1 series to include the ZXP7-41-X1, ZXP7-21-X1, ZXP7-11-X1 and ZXP7- X1-ASSISTA extended. On the one hand, customers benefit from extensive advantages such as time savings during installation and maintenance, more flexibility thanks to a variable number of vacuum cups and individual mounting options. On the other hand, you get the additional compatibility with the cobot manufacturers OMRON Corporation and TECHMAN ROBOT Inc. and their TM series,the CRX-10iA and CRX-10iA / L series from Fanuc Corporation, the MOTOMAN-HC10DT series from Yaskawa Electric Corporation and the MELFA ASSISTA series from Mitsubishi Electric Corporation.

Quickly ready for use for more cobot systems

The addition of the various series increases compatibility significantly. This enables the use on even more robot systems than before, which gives process engineers additional flexibility. Commissioning is still quick and easy – from simple and intuitive programming to effortless connection of the air supply line and electrical wiring. Overall, the vacuum cups can be attached with little effort via the suction cup mounting flange in accordance with the ISO9409-1-50-5-M6 standard. A mesh fabric attached to the vacuum connection also prevents foreign bodies from entering the system.

As varied as ever

Thanks to the mounting flange, the suction cups can be attached at different distances on the one hand and used separately with an external vacuum source on the other. In addition, the optional attachment of the vacuum safety valve of the ZP2V series from SMC optimizes the process and the vacuum can therefore be maintained during the transfer even if the suction cups are not in use. The ZXP7-41-X1, ZXP7-21-X1, ZXP7-11-X1 and ZXP7-X1-ASSISTA series are also light-footed:Here, too, the low weight and slim external dimensions have a positive effect on the mass moment of inertia and dynamics, as in the ZXP7-01-X1 series.

Can be used by even more customers across the industry

All variants of the ZXP-X1 series are designed as an all-in-one unit due to the integration of vacuum generators, vacuum cups, valves and pressure sensors in a single element and are therefore ideally suited for a wide variety of tasks across the industry thanks to the many advantages.

By expanding the series of the gripper unit also for the Cobot series TM5, TM12 and TM14 from OMRON / TECHMAN, CRX-10iA and CRX-10iA / L from Fanuc Corporation, MOTOMAN-HC10DT from Yaskawa Electric Corporation and MELFA ASSISTA from Mitsubishi Electric Corporation Even more customers from the food industry and medical technology, the paper and packaging industry as well as forestry or the general automation and manufacturing industry can benefit from the advantages of the vacuum gripper unit. 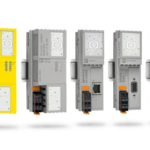 Vacuum chambers for automated applications with robots and cobots