LAPP develops innovative connectors with the aid of digital twins

The trend towards miniaturisation is continuing in many areas of industry, with applications becoming more compact, assembly spaces smaller and the need to create a pluggable connection growing. The EPIC POWER M12 connectors are the response to these market requirements, and they have been consistently implemented. In automation technology, the interference-free transmission of data as well as the reliable power supply of the individual components are both sensitive issues. PROFINET fully relies on the standardised M12L connector.

“The previous M12 connectors have already been developed very close to the limits of feasibility. We have now checked all the adjusting screws once again to achieve the best results. Without a design using a digital twin, this would hardly have been possible,» explains Martin Guserle, Head of Business Unit EPIC® Connectors at U.I. Lapp GmbH.

During development, the technical properties of the connectors were simulated using virtual models. The two M12K series for energy transmission up to 630V/12A and M12L up to 60V/16A were virtually put through their paces before producing the first 3D-printed model. This means that the limit of power transmission with increasingly smaller connectors is first evaluated virtually and then transferred to initial prototypes and series production. Compared to connectors previously developed by LAPP, this results in significantly smaller design sizes, yet with improved power transmission

The new EPIC® POWER M12L and M12K connectors have a wide range of applications. For example, they are suitable for small robots known as «cobots», which collaborate with humans in production or in the warehouse. Or for automated guided vehicles (AGVs), such as in the LAPP logistics centre in Ludwigsburg. Such autonomously driving transporters also involve tight spaces for all components. Use in I/O modules for PROFINET is another big field of application for the EPIC® POWER M12L connector. Hitherto, 7/8″ connectors have been the standard power interface for the sensor/actuator distributor. The change from the old standard to the M12L enables boxes to be reduced in size by over 50%. The PNO has defined the M12 L-coded as the interface for the power supply for all PROFINET applications. This is the set standard for PROFINET devices such as intelligent motors or I/O modules. The M12 L coding offers the ideal conditions for this.

Martin Guserle: «We anticipate that the majority of new machines and systems will be set up with M12 L coding as the power interface in the future.» The Automation Initiative of German Automotive Manufacturers (AIDA) has also already decided to set the M12L as the standard
Attachments 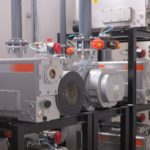 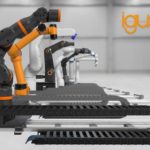 Connection technology is the basis of Industry 4.0