The second generation of the KR QUANTEC PA palletizing robot now offers more speed with reduced cycle times. Thanks to its load capacity of up to 240 kilograms, the robot grips neatly and in its version with NSF H1 food-grade lubricants, it is also a real benefit for the food industry.

KUKA has completely reworked its KR QUANTEC PA. Developed specifically for demanding palletizing tasks, this second generation design, released in October 2021, includes optimized weight and center of gravity as well as improved drive units, which build on the latest technology for gear units and motors. Its reduced footprint requires very little space. Up to 10% faster that its predecessor with a comparable payload, the KR QUANTEC PA also sets new automated production standards for cycle times.

“With the second generation of the KR QUANTEC PA, we have achieved a perfect balance between axis velocity and acceleration – for the best cycle times,” said KUKA product manager Michael Laub. For example, the robot type achieves 28.3 cycles per minute with a payload of 240 kilograms. “Beyond this, we also worked to increase axis velocities – for example, for layer formation during palletizing or long 180° rotations.” To meet the increased requirements of the consumer goods industry, especially the food industry in the secondary sector, KUKA also offers the palletizing robot in a “Hygienic Oil” (HO) variant. which uses food-compatible NSF H1 lubricants in all axes and the energy supply system.

Standard KR QUANTEC PA models and their HO variants are designed for the latest KUKA KR C5 robot controller. These second-generation robots also offer outstanding value and total cost of ownership (TCO). The Mean Time Before Failure (MTBF) of the entire robot arm has improved significantly to 400,000 hours while maintenance effort has reduced by 50% compared to predecessor models. With this new design, the robot only needs a visual inspection, lubrication of the counterbalancing system bearings and an oil change every 20,000 operating hours. This likely makes the KR QUANTEC PA the best robot in its class. 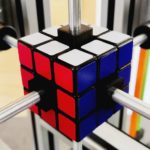