When KUKA robots create furniture, they are by no means taking work away from carpenters. The 3D-printed TWINE seating and bench modules – designed by HagenHinderdael in London – are something completely new in the world of furniture, engineering and recycling.

Design studio HagenHinderdael was founded in 2020 by architects and designers Sofia Hagen and Lisa Hinderdael. «Our ethos is to celebrate time-honored craftsmanship and think about the entire life cycle of installations,» they state. They implement ideas they’ve gleaned from all over the world: Hinderdael is from Belgium, Hagen from Austria – both have been successful in international settings.

«We had the idea for TWINE when Rossana Orlandi launched her third Guiltless Plastic campaign,» recalls Sofia Hagen. Orlandi, a Milanese gallery owner, regularly calls on artists and designers to exhibit their projects to reduce the mountains of trash. So HagenHinderdael invented TWINE. «We wanted our furniture to be playful, comfortable and durable, and we wanted to use filaments from the company Reflow,» says Sofia Hagen, describing the creative ambition behind the project. Reflow, an award-winning social enterprise in Amsterdam, extracts the material for 3D printing, called filament, from recycled plastic waste. The raw material for TWINE, rPETG filament, comes from discarded hospital trays.

TWINE has been named a finalist for the RO PlasticPrize 2021. Whoever is awarded this prize for objects made of recycled plastic makes headlines across Europe. As a result, a TWINE seat was sent on its way to Milan for the exhibition.

HagenHinderdael engaged Ai Build in London, who had already done a lot of work with reflow filaments, to make this and another piece of furniture.

Deliver durability and aesthetics – without laying hands on

Founded in 2015, Ai Build is a software-as-a-service company that «currently employs humans20 and five KUKA robots,» as Chief Operating Officer Michail Desyllas describes it. The team works primarily for Tier 1 companies in the aerospace, automotive, construction, marine and energy industries. Desyllas reports, «The biggest challenge on this particular project was the geometry of the parts and the aesthetic finish we wanted. We weren’t allowed to change anything.» Ai Build decided that a KR30 L16 from the KR IONTEC series and a KR90 R2700 from the KR QUANTEC series would do the job, «because these robots have the reach to allow the finishing of these parts. Also, our software is fully integrated here, which allows us to monitor quality and report defects in real time,» says Desyllas.

Since TWINE was to flow along like waves, Ai Build designed a mold for it, a kind of curved double bed on which the still-hot material from the 3D printer could cool down and solidify. The narrower elements were made by the KR30 L16, the wider ones by the KR90 R2700, with both robots equipped with a filament extruder system. This system captures up to four different filament streams in diverse colors. This allows for a special play of colors.

Desyllas admits that applying the rPETG filament was tricky: «Each layer has to be applied within a certain time window. Not directly after the previous layer, so that nothing sags, but also not too late, so as not to jeopardize the adhesion of the layers.»

With good preparation and thanks to the care of the robots, aesthetic, robust and comfortable seatingfurniture could be created. Sofia Hagen and Lisa Hinderdael also liked the result. They sent TWINE toMilan, where they didn’t win a prize, but they won many hearts.

At the end of September, the furniture became part of the «Planted» show that ran as part of the London Design Festival. In March 2022, TWINE will be exhibited at the Vorarlberg Architecture Institute in Austria. In the future, TWINE seating elements will be individualized and created at KUKA’s Italian partner Caracol-AM. 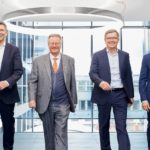 Strong surge in growth for LAPP, turnover of rose by 26.1 per cent 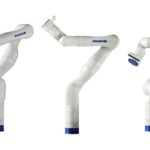