Based on an extensive portfolio of high-performance SCARA robots, FANUC is now pitching its technology advantages to the food industry with the release of two new models. Offering a highly competitive price-to-performance ratio, the FANUC SR-3iA/C and SR-6iA/C provide users with a number of special features that make these fast and precise SCARA robots ideal for use in food plants and cleanrooms.

The new SR-3iA/C (3kg payload, 400mm reach) and SR-6iA/C (6kg payload, 650mm reach) use the same mechanical structure as FANUC’s proven and highly successful SCARA range. However, there are also several notable differences, such as a white epoxy coating for extra durability in severe environments, and an IP54 protection rating that guards against the ingress of contamination from dust and water spray. The latter makes the robots suitable for use in food plants and cleanrooms that require clean-down procedures. As a point of note, a special bellow protects the operation-critical spindle during cleaning, setting it apart from competitor SCARA robots.

Further features that promote the SR-3iA/C and SR-6iA/C as ideal candidates for food processing facilities and cleanrooms include the standard use of food-grade grease certified to NSF-H1, along with anti-rust bolts, both of which are essential in food handling applications.

Operating in a 360° envelope, both of the new FANUC SCARA robots (by virtue of their pedestal-mount design) offer an ultra-compact, space-saving footprint in comparison with similar competitor models. As a result, food plants and system integrators can build smaller cells while still accessing the full reach of the robot. Importantly, the small footprint and robot design minimise any potential interference with peripheral devices to simplify integration.

Fully integrated services within the arm of the SCARA robot, such as solenoid valves and pneumatic air lines, further help to reduce interference contours and snagging, while also reducing costs. Notably, both robots offer easy error recovery via a brake release switch on the arm.

Like all FANUC SCARA robots, the economical attributes of the new energy-efficient SR-3iA/C and SR-6iA/C receive a further boost courtesy of their control capabilities. The robot provides complete compatibility with FANUC’s latest R-30iB Compact Plus controller. Furthermore, thanks to a web-based user interface (FANUC iRProgrammer software), users can enjoy fast, intuitive, platform-independent set-up, jogging, teaching and programming via a tablet or PC, dispensing with the need for an iPendant Touch.

The new SR-3iA/C and SR-6iA/C provide the next-level performance characteristics common to FANUC’s existing SCARA range, including very high speed capabilities. Depending on the application, the robots can complete up to 120 cycles per minute. However, despite this rapid movement, there is no compromise in precision: the SR-3iA/C and SR-6iA/C deliver ±0.01mm repeatability in the linear axes and 0.004° wrist rotation repeatability. Furthermore, the wrist offers ±720° of motion as standard (3000°/s speed), with continuous rotation available as an option.

Any food plant or cleanroom seeking a plug and play solution can take advantage of fully integrated FANUC technologies such as the iRVision visual detection system and iRPickTool for the intelligent tracking of goods on a moving conveyor.

With their ISO Class 5 cleanroom rating, the latest FANUC SR-3iA/C and SR-6iA/C SCARA robots will also prove attractive to pharmaceutical plants, potentially for applications such as syringe assembly.

Beyond the new SR-3iA/C and SR-6iA/C SCARA robots, FANUC offers a wide range of other robot types suitable for food industry applications. For example, if food plants need manipulation beyond standard linear axes, or require higher payloads or longer reach, FANUC is able to provide food-grease equipped industrial robots, collaborative robots, palletising robots, delta robots and more. As a result, food processing facilities can tap into the expertise of FANUC for applications that include: automating delicate processes such as slicing meat, decorating cakes or filling trays; automating the handling/picking of food products; and automating end of line packing and palletising tasks. 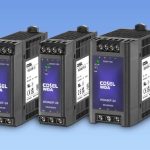 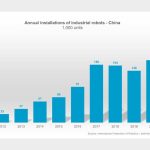 Half of the industrial robots installed globally are located in China