igus is expanding through investments in its in Low Cost Automation and has now acquired the majority shares in Commonplace Robotics based in Bissendorf near Osnabrück. As an integrator, Commonplace Robotics specialises in intuitive control systems and software, as well as power electronics for robotics, both in industry and in education. The two companies have been cooperating intensively for six years and have, among other things, developed the igus Robot Control , which supplements igus’ low cost kinematics made from high-performance plastics.

Dr. Christian Meyer, who worked at the Fraunhofer Institute for Production Engineering and Automation at that time, founded the company Commonplace Robotics 11 years ago. The name says it all: Make the integration and operation of robots so cost-effective and easy that they become “commonplace” – meaning they can be used anywhere. The first products with a control system and proprietary power electronics were robots for teaching. Christian Meyer approached igus in 2016 because he found that igus robotic kinematics matched his vision of “commonplace”: Cost-effective, simple and suitable for the industry.

Since then the two companies have jointly developed products such as the iRC igus Robot Control, an actuator and the ReBeL cobot. Thanks to the high level of vertical integration of Commonplace Robotics – from firmware and software to switch cabinet construction and circuit board assembly – new developments can be quickly implemented.

“Many customers are surprised that they can implement simple robot tasks in just 30 minutes without any programming knowledge,” says Frank Blase, CEO of igus GmbH. “We are very pleased that, following intensive collaboration over the last six years, an even more focused approach to Low Cost Automation is now possible.”

With this acquisition, Commonplace Robotics and igus are combining their innovative strengths. Dr. Christian Meyer: “We are looking forward to exciting technological projects with igus. The RBTX platform for low cost robotics, which is operated by igus brings new requirements from customers from all areas of the industry to our laboratories every day. Much of this can be implemented quickly, especially as we are expanding with this investment.”

The latest product of the collaboration is the ReBeL cobot for 4,970 euros including the control system. The actuator, also available as an individual component, combines igus’ plastic know-how in the gearbox with the power electronics and software from Commonplace Robotics. With six axes, the ReBeL can handle a payload of up to two kilograms with a range of 664 millimetres – and all that with a net weight of just 8.2 kilograms. Requests and orders come from traditional areas of applications such as quality control and pick and place applications in mechanical engineering, however new areas of applications such as restaurant automation or urban farming are now becoming more frequent.

At Motek in Stuttgart (hall 7, trade show stands 7320 and 7321) and SPS trade show in Nuremberg (hall 4, trade show stand 310), interested parties can get a live demonstration of the innovations that have been developed together. 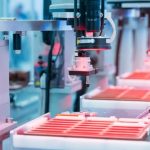 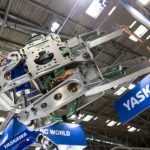