The requirements for edge PCs are becoming more demanding because the amount of data is increasing and the speed with which it has to be processed. The Embedded PC TANK-XM810 is a new development, designed for machine vision, intelligent manufacturing, digital surveillance, intelligent transport systems, machine learning and all smart applications that require computing and graphics power.

The TANK-XM810 series is equipped with 10th generation Intel® Core™ i7/i5/i3 processors, with a maximum of eight cores, two GHz base frequency, up to 4.4 GHz burst and 16 MB smart cache. Intel® Smart Cache refers to the architecture that allows all cores to dynamically share access to the last-level cache. The 10th Gen Core i7 delivers 50 percent better multitasking performance on compute-intensive applications than the 9th Gen. Two SO-DIMM memory bars with 2933 MHz DDR4 RAM allow a capacity of up to 64 GB, with 8 GB already pre-installed. The data is stored either on a 2.5-inch HDD/SSD or on an M.2 M-Key module with PCIe x2 signal that supports RAID 0/1. More processing power, faster memory and higher I/O capacity all combine to ensure that the TANK-XM810 reliably handles multiple workloads.

The TANK-XM810 supports the unique eChassis modules that enable performance boosts through GPUs, accelerator cards and other add-on cards. The TXC-XM81-G1 and TXC-XM81-G2 eChassis modules are expansion cases that provide additional PCIe slots so that up to two graphics cards with 600 watts of power can be integrated in the full-length and full-height form factor. Additional PCIe slots can be used for other add-on cards such as high-speed I/O cards, data acquisition cards, frame grabber cards, etc.

The TANK-XM810 solves the stable supply of add-on cards with high power consumption with two power inputs. The optionally integrable IDD-X1228150 power board offers additional power for GPU cards and accelerators that require more than 75 watts. Two more eChassis modules can be equipped with backplanes that offer additional slots for PCIe x1, PCIe x4, PCIe x16, but also for the older PCI standard. This allows modules for WLAN6 and Bluetooth 5.0 to be integrated. The dual SIM socket establishes an LTE mobile connection and ensures network redundancy. The Embedded PC is 5G-capable via a 5G add-on card.

Embedded computers are often used in environments where it is difficult or expensive to install power outlets for connected devices such as cameras and sensors. The TANK-XM810 can be equipped with eight 2.5GbE PoE+ ports via an optional module.

Each port provides power to devices up to 30 watts over the Ethernet cable while transmitting data. The 2.5 Gb Ethernet standard also allows high-resolution video feeds to be processed. A DisplayPort and an HDMI 1.4 that achieve 4K resolution are available for connecting two independent displays. But the most modern interfaces are not always required. Four RS-232 and two RS-232/422/485 are included as well as 12-bit digital inputs/outputs. Two USB 2.0 are suitable for devices such as keyboards and mice, and six USB 3.2 Gen2 ports can even connect augmented reality equipment at 10 gigabits per second.

The robust hardware architecture protects the small-design computer in harsh environments. The operating temperature is between -20°C and 60°C. The voltage input is broadly applied with 12 V DC to 28 V DC. The TANK-XM810 is MIL-STD-810G 514.6CC-1 certified and shock resistant.

The PC is designed without a fan, but the pin-fin heat sink concept is very effective, so that an external fan is only necessary for a processor with a TDP of 65 watts. The fan is screwed onto the pin fins on the outside so that no dust can penetrate the inside of the PC. The TANK-XM810 is one of the smaller Embedded PCs with 230.6 x 256.04 x 76.2 mm on its own, i.e. without eChassis boxes. This makes it easy to install in systems and machines. A mounting kit is available for this purpose, which firmly screws the PC to the wall, in the cabinet or on the desktop. 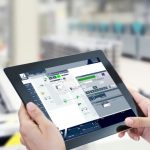 COPA-DATA at SPS 2022 – The integration of interdisciplinary data 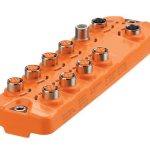