A compact inline device that requires no mounting, the new DP2200 signal converter from ifm electronic takes a standard 4-20 mA analogue signal – typically from a sensor – and converts it to an IO-Link digital signal. This makes it easy to interface legacy devices with more modern control systems. In addition, the converter features an integral four-digit display that provides a convenient local real-time readout of the incoming analogue signal value.

The DP2200 uses standard M12 connectors for input and output and is simply inserted into the signal line between the analogue input device and the control system. In most cases, it will be adequately supported by the cables and no additional mounting will be needed, which makes installation fast and straightforward.

As well as its signal conversion and display functions, the DP2200 also allows users to define a setpoint for the analogue signal value. If this setpoint is exceeded, the display changes colour from green to red, and an auxiliary digital switching output, which can be set to normally open or normally closed, changes state. A further feature is a 4-20 mA repeater output which tracks the input signal and can be used to pass it on to other devices.

To complement the DP2200, ifm electronic also offers the DP1213 signal converter, which performs the inverse function by taking an IO-Link signal and converting it to two 4-20 mA signals. Adopting the same physical format and inline installation arrangements as the DP2200, this device has no numerical display but incorporates three status indication LEDs. Once again, it is an invaluable aid to interfacing legacy devices with modern control systems. 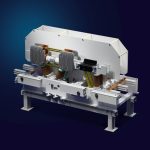 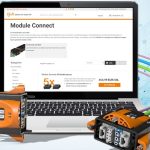 Quick access to a customised interface for Module Connect